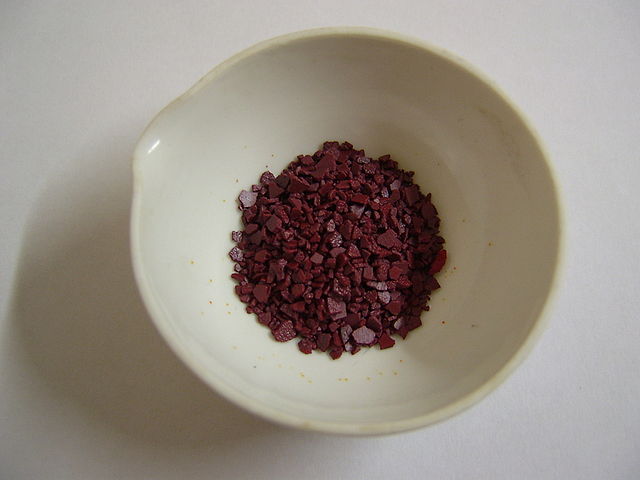 An example of a Chromium 6 compound: Photo: BXXXD via Wikimedia Commons

A committee investigating the exposure of over 800 long-term jobless people to the highly toxic chromium 6 paint in a Tilburg workshop says Tilburg council, the Dutch rail museum and NS subsidiary NedTrain are responsible for the damage done to their health.

The committee has recommended Tilburg local council take the lead in compensating the affected workers who were all unemployed and were taking part in a reintegration project which ran between 2004 and 2011. They were put to work in a workshop in Tilburg where they had to remove paint from old trains destined for the rail museum.

The paint contained chromium 6 which can cause cancer. They were not told of the risks and did not wear protective clothing or masks.

Some 70 people who have fallen ill have since started legal procedures against Tilburg local council, broadcaster NOS reports.

At a press conference on Thursday, committee chairman Peter van der Velden said that all three parties had been negligent and called the lack of information given to workers about the toxicity of chromium 6 ‘shocking’. He also slated the lack of a reaction when worried workers expressed their concern.

‘This is a big fail. It is possible that people have fallen ill because of exposure to chromium 6 and more may fall ill in the future. We cannot guarantee they won’t and that is a very painful conclusion,’ he told the press.

Tilburg mayor Theo Weterings said the report was a ‘tough indictment’ and said ‘it shouldn’t have happened this way’. The council will be putting together a compensation package next week when it has studied the report, NOS reports.

The findings may also have ramifications for an investigation started in November by the public prosecutor’s office into the events in the Tilburg workshop.