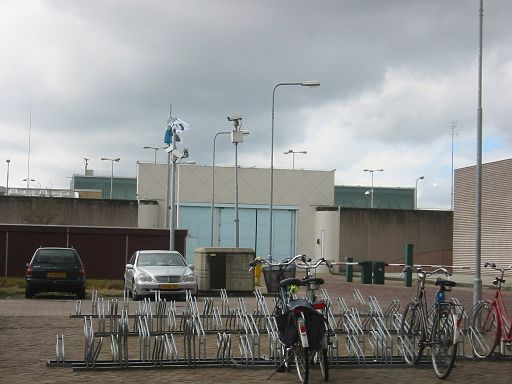 Outside the prison walls. Photo: Mystro82 from nl via Wikimedia Commons

Books by radical Muslims, including by people banned from entering the UK for praising suicide bombings, are available in the library at the high security prison in Vught, the Telegraaf said on Friday.

MPs from the Christian Democratic party CDA and the anti-Islam PVV have asked the government to explain why the books are kept in a prison library used by people convicted of terrorism offences in the Netherlands.

‘It is incomprehensible that such books are being loaned to dangerous prisoners,’ MP Madeleine van Toorenburg told the paper. ‘It is hard enough as it is to help prisoners ditch their radical ideas and it does not help if they can read books about intolerance and armed jihad in their own cells.’

Among the books which the Telegraaf says are in the library are works by Bilal Philips, who has been banned from Britain and whose books were taken out of British prison libraries in 2016.

The Dutch prison service has confirmed that controversial books are in the library but said that experts assess all requests for loans to see if they should be granted.

And VVD parliamentarian Foort van Oosten told the paper that taking action against ‘wrong’ books does not fit in with the concept of a free society. ‘We can’t exactly go through every book looking for offensive texts and removing them,’ he said.