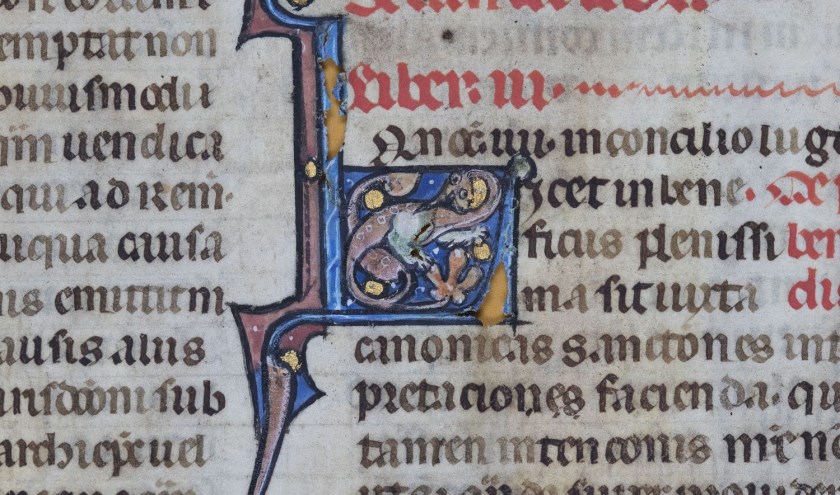 Part of one of the pieces of recycled parchment. Photo: Utrecht Archives

A search in the archives of Utrecht and the city’s university library by master student and medievalists has unearthed hundreds of fragments of medieval parchment which had been used to mend books, cover documents and recycled in various other ways.

The fragments, some no bigger than a stamp, others comprised of several pages, tell of such diverse subjects as religion, eating habits, poetry, medicine and astrology. Among the more spectacular finds are the only known written text by Christian theologian Novatianus from the 9th century and medieval music scores that have never been played.

The Novatianus document is the oldest in the Utrecht archives and unique because Novatianus’ work is only known in later print versions. Incredibly, to the modern eye, the text was not very carefully treated. It was used to bind a document around 1550.

According to curator Bart Jaski, who mounted the exhibition Perkament in Stukken (Parchment in pieces), ‘sustainability is nothing new. (..)To us these are cultural treasures but then they were just something to be recycled, he said in an interview with broadcaster NOS.

‘Parchment is hard wearing and was used for flyleaves to protect the inside of books from the leather and metal that was often used in bookbinding.’ Bits of parchment that were written on or damaged and so no longer useful were also used as a cheap way of binding books, a practice known as maculature, latin for spot or macula.

The exhibition is the result of years of parchment hunting by students and lecturers. They found a text by pope Gregory used as a cover for a bill for beer, Bible fragments to cover an annual account and music scores in a book on theology. In total, 38 of the finds have been brought together in a book compiled by Janski.

‘We don’t have that many written documents from the Middle Ages, perhaps a few hundred. The fragments that we have found dating from the 11th and 12th centuries are like pieces in a puzzle. We are the detectives, comparing them with later texts from the 15th century. We can then see the changes that were made and find out things we didn’t know,’ he told NOS.

A piece of parchment from the 11th century used to bind a number of bills four centuries later, for instance, holds a description of how holy German emperor Henry III gave a huge candelabra to the Dom in Utrecht where his father’s entrails were buried.

‘It says how much the candelabra cost, it was pounds of silver and gold , a big investment. We didn’t know this. These tidbits of information are very useful because we really don’t know much about that time.’

Parchment in Pieces is on until January 6 at the Utrecht archive.