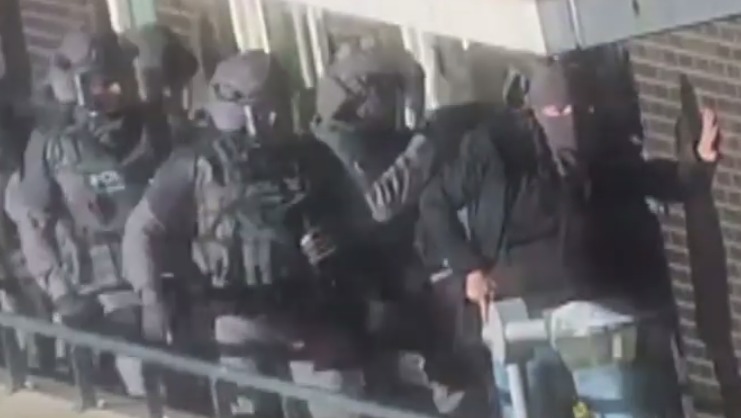 A still from the police footage of one raid

Dutch police said on Friday morning they had completed their searches of private homes, following the arrest of seven people on Thursday who, police say, were planning a major terrorist attack.

But police are remaining tight-lipped about what they found during the search, broadcaster NOS reported. They did say on Thursday they had seized five handguns and several vehicles, including a minibus rented in France.

The suspects range in age from 21 to 34 and three of them, including the alleged ringleader, have previous convictions for attempting to join IS in Syria, the public prosecution department said in a statement.

The department began an investigation into the 34-year-old man they suspect to have led the cell in April, following a tip-off from the AIVD security service.

The AIVD said the man, an Iraqi national, had been planning an attack at a major event in the Netherlands with the aim of creating as many victims as possible.

Identified in the Dutch press as Hardi N, in 2017 he was convicted on appeal of preparing to take part in terrorist crimes by going to Syria to join IS. He was jailed for three months and given three years probation.

Another of the men is said to be Wail el A, who was arrested last year while taking photographs at the Volkel military air base. He also has a conviction for attempting to travel to Syria and join terrorist forces there, the Telegraaf said.

Local paper De Gelderlander says one of the men arrested in Arnhem is a 26-year old Afghan national named Nadeem S. He was picked up with Wail el A at the Syrian border in 2015 by undercover Turkish police officers, the paper said.

A fourth man is said to be a Kurdish national whose family lived in Huissen, a small town in Gelderland. Locals told the media the family, which includes two adult sons and two adult daughter, and have lived in the same street for nine years.

A fifth member of the alleged cell is said to be Morad M who is  21, from Vlaardingen and a national boxing champion.

There are also reports that an 18-year-old youth from Arnhem, known as Amir, has been arrested. His father is Egyptian and his mother Polish. She confirmed the arrest to Dutch reporters but said her son showed no signs of becoming radicalised. However, Thursday’s police report described the arrestees as aged 21 to 34.

It has also emerged that the two men arrested in Weert in Limburg were living on a holiday park and that three vehicles, including the minibus were seized during that raid.

‘They do not live in Weert and they are luckily not from Weert,’ the town’s mayor Jos Heijmans told a television talk show on Thursday evening.

Home affairs minister Kajsa Ollongren has said in a statement she is proud of the way different agencies worked together on the investigation. And justice minister Ferd Grapperhaus said the news was to be welcomed. ‘A terrorist cell has been rounded up and arrested,’ he said.

At the beginning of this year, AIVD chief Rob Bertholee told a television show the agency has foiled ‘three or four’ serious potential terrorist attacks in the Netherlands over the past six years.

There has also been one recent incident in the Netherlands in which a 19-year-old Afghan with refugee status in Germany stabbed two American tourists in Amsterdam.

In The Hague, a Pakistan national was arrested for making threats against anti-Islam campaigner Geert Wilders.

Update Friday evening: Public prosecutors said at Friday’s remand hearing that searches of the suspects houses had yielded ‘a considerable amount of raw materials for explosives for bomb vests and 100 kilos of artificial fertiliser, which could be suitable for a car bomb’.