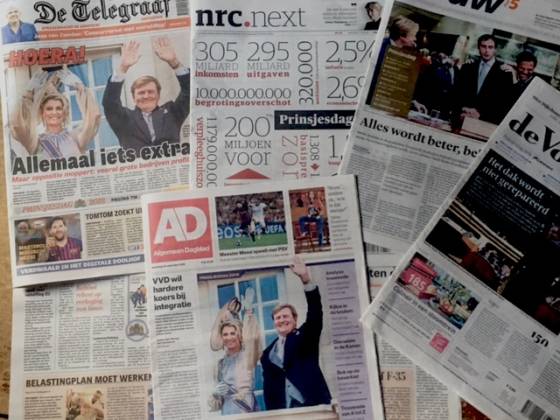 The Dutch papers have, as usual, devoted pages and pages of newsprint to the government’s 2018 spending plans which were announced on Tuesday. Here’s a round-up of the main editorials.

In its editorial the NRC advises caution: the Netherlands may have almost returned to the budgetary, ‘pre-Lehman’ crisis position of 10 years ago but the economic growth of 2018 and 2019 is ‘not due to a sudden burst of vitality’.

Danger looms and the impact of Brexit, a trade war and tottering emerging markets make extra national financial buffers necessary now that the ‘monetary munition’ of the European Central Bank has been spent, the paper says.

The fact that the money lost by scrapping the tax on dividends would be almost enough to provide that buffer is ‘ironic in the extreme’, the NRC writes.

Trouw is also warning about a post-Prinsjesdag meltdown similar to the one of 10 years ago, thanks to Brexit and ‘a US president whose decisions do not include any thoughts of the risks to the world economy.’

On a national level the cabinet is ‘blowing bubbles’, Trouw writes, with a ‘madly overheated housing market’ and money that is ‘far too cheap’.

There is more prospective Brexit woe in the AD.  ‘It [the spending power projection] DN) will all come to nought if Mark Ruttes’ nightmares come true and the UK and Europe part ways in 200 days’ time…  if there is no deal the Netherlands will lose much, much money’, the paper writes.

‘Hurrah, we’re all getting something extra’ the Telegraaf headlines, but the paper’s editorial is not quite so jubilant, arguing that the something extra is not enough. ‘The cabinet must make sure that the working people and pensioners in particular, profit more from the economic growth in 2019. It must honour its promises’, the paper writes.

The Volkrant opens its front page with ‘The roof is not being repaired’. In an analysis, the paper says that the budget looks ‘wonderful’. But appearances can be deceiving as the ‘prudent independent institutions such as the Council of State and the CPB have pointed out’.

The Volkskrant also refers to the government’s precarious financial future stability and the need for something put aside for a rainy day’, when a leaky roof would not be a good thing.

It is the same old story, the paper writes. ‘Politicians have to give presents to voters in order to be re-elected. When things are going well and the economy is flourishing the pressure on politicians grows to be generous and plunder the kitty’.