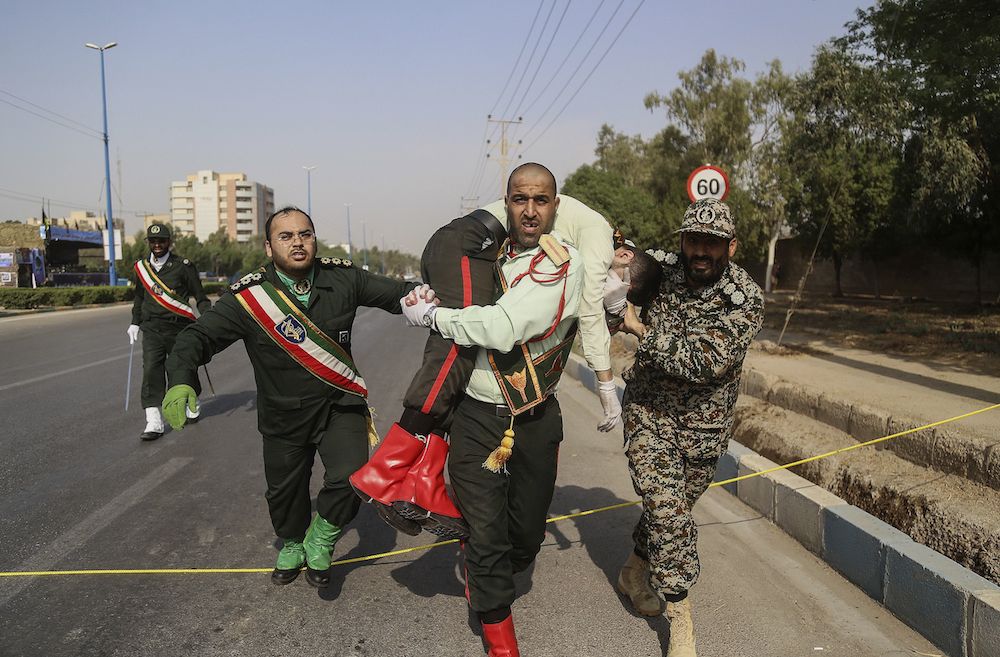 An Iranian soldier carries an injured colleague after the attack. Photo: CHINE NOUVELLE/SIPA/1809231130

Iran has criticized the Netherlands, Denmark and Britain for hosting ‘members of the terrorist group’ which it says carried out Saturday’s shooting at a military parade in the south of the country.

Qasemi said the Danish and Dutch ambassadors were told that Iran had already warned their respective governments about the presence of the ‘terrorists’ and called for their arrest and trial.

‘It is not acceptable that the European Union does not blacklist members of these terrorist groups as long as they do not perpetrate a crime on the European soil,’ Qasemi is quoted as saying by Iranian state news agency INRA.

The Dutch foreign affairs ministry has confirmed that there was a meeting. ‘We listened to Iran’s reading of the situation and we offered our condolences for the attack,’ the ministry is quoted as saying by broadcaster NOS.

Gunmen sprayed a crowd with bullets in the city of Ahvaz, killing at least 25 people, including children during the parade. According to Iran, a group called the ‘Arab Struggle Movement for the Liberation of Al-Ahwaz’ carried out the attack.

But the organisation said later on its website that the organization and its military wing do not assume responsibility for the attack on the military parade. The report is  being spread by a ‘suspicious small group’ that claims to be a part of the ASMLA organisation, the website said.

Last November, the leader of the ASMLA was shot dead in The Hague.