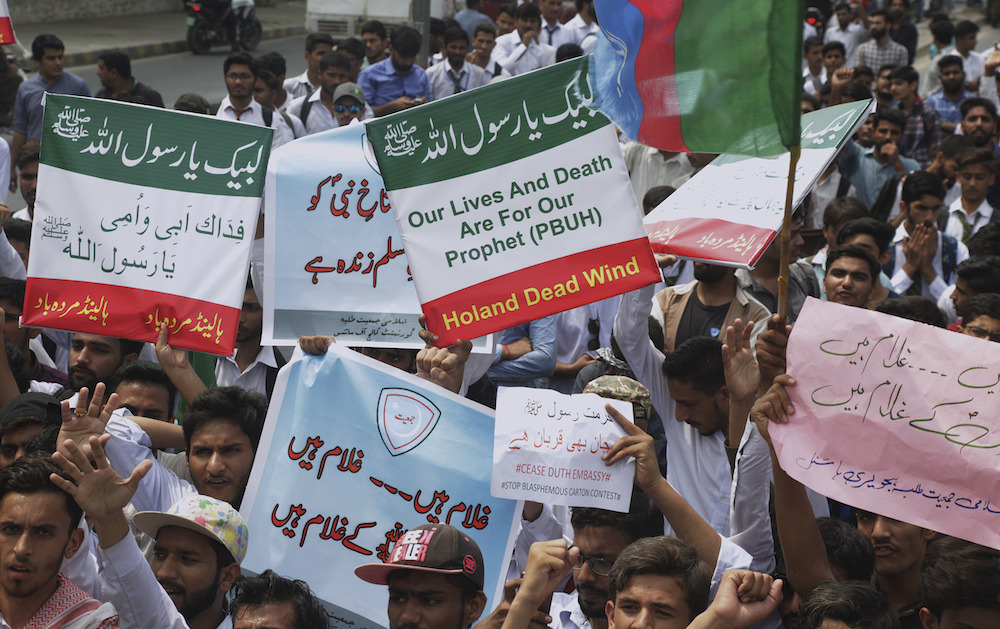 Dutch nationals travelling to Pakistan are being warned to avoid demonstrations against Geert Wilders’ controversial Mohammed cartoon competition and to ‘keep a low profile’.

The foreign ministry travel advice was revised on Wednesday following demonstrations by Muslims protesting about the contest in several cities, including Islamabad, Lahore and Karachi.

At the same time, the Dutch port and dredging sector has cancelled a trade mission to Pakistan, set for early November, in the same week that the winners of Wilders’ competition are due to be announced.

Earlier this week, a man from Pakistan was arrested in The Hague after placing a video on Facebook in which he appears to threaten Wilders, although he does not mention him by name.

The protests in Pakistan are being organised by the fundamentalist Islamic party TLP, which attracted several thousand protestors to a march from Lahore to Islamabad.

They are demanding that Imran Khan’s new government sever diplomatic ties with the Netherlands because of the ‘blasphemous‘ competition. Pakistan’s senate has passed a resolution condemning the competition and Khan has vowed to take up the issue at the UN general assembly in September, the Guardian reported.

Meanwhile, Amsterdam imam Yassin Elforkani has called on Dutch Muslims to be merciful to people who attack the religion.

Prime minister Mark Rutte has described the Mohammed cartoon competition as ‘not respectful’ and ‘provocative’ but said that he supports free speech.

Wilders, who leads the second-biggest party within the Dutch parliament, will announce the winners of the competition in the high-security PVV offices in The Hague parliamentary complex in November. He claims to have had over 200 entries so far.