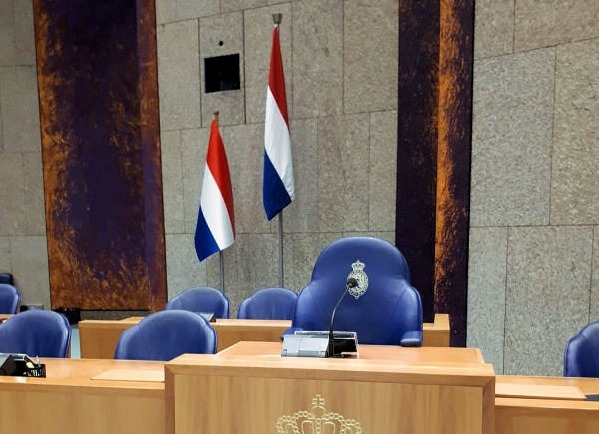 The new and the old flags, side by side. Photo: Tweede Kamer

A bigger and better Dutch flag has been placed in the lower house debating chamber after the original one was said to look like a piece of cheese on a cocktail stick.

The cost of the new flag, which has been approved by the parliamentary arts committee, was around €12,000, according to parliament’s own website.

Parliamentary chairwoman Khadija Arib had said the old flag did not fit in with the design of the lower house. ‘This one has more grandeur and style. It’s not a cocktail stick, it doesn’t come from Madurodam, and not from Action or Ikea either,’ she said.

The new flag has been designed by Askon Eden, who was responsible for the new debating chamber and the stand has been made by a furniture maker from pear wood and stainless steel.

‘The national flag has a clear function as a national symbol and flags in parliament are a feature in other countries as well’,  the website says.

A temporary flag was placed in the meeting room which has now been replaced by a bigger flag, although for some it is not big enough.

‘This flag is better than the one we had before but it is still much too small,’ FvD MP Thierry Baudet, told the Volkskrant.

Flag waving is a sign of times, the paper writes, with many local councils and provincial authorities also opting for a national flag, often accompanied by a European one. But that would be a step to far for most Dutch MPs, the paper said.