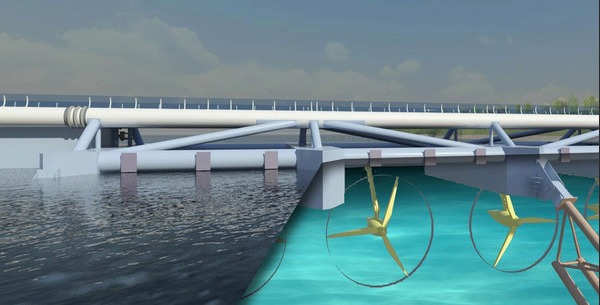 Building group BAM has acquired the majority stake in Tidal Bridge of Eindhoven from construction company Strukton, BAM said in a statement on Tuesday. Financial terms were not disclosed.

Tidal Bridge designs and builds floating bridges equipped with tidal turbines which generate power. The turbines are powered by the ebb and flow of the tide.

Tidal bridges are ideal in remote areas where they can serve as stand-alone power plants. The company is active in Indonesia, a country of 17,000 islands, most of them requiring electricity plants.

Tidal Bridge started a feasibility study last year for the construction of a $225-million floating bridge on the Indonesian island of Flores known as the Palmerah Tidal Bridge project. Turbines beneath the bridge will generate up to 30 megawatts from the tidal movements, providing electricity for over 100,000 people in the region.

The share transfer is related to a strategic decision by Strukton to discontinue its activities in the Indonesian market.

BAM International, which has been active as a construction and infrastructure contractor in Indonesia since 1970, is seen as the ideal partner for the realisation of the Palmerah Tidal Bridge project as well as the international dissemination of the Tidal Bridge concept, the Financieele Dagblad said.