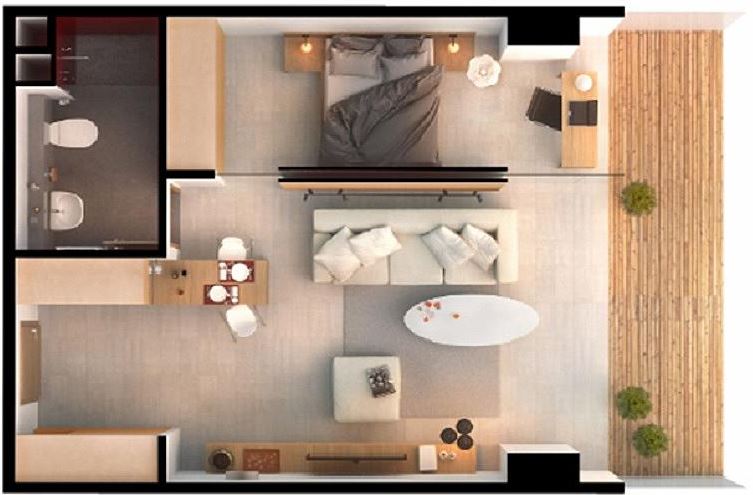 Project developers are rolling out complexes of micro-apartments in Amsterdam, Rotterdam and even Leidsche Rijn near Utrecht in an effort to head off the shortage of homes for newcomers on the housing market, the Telegraaf said on Monday.

Micro-apartments usually measure between 29m2 and 32m2, or the size of a large master bedroom in a more traditional home. Nevertheless, all are equipped with a kitchen, toilet and shower and come complete with shared facilities such as a launderette, cafe and even guest accommodation.

IC Netherlands, for example, has just delivered two enormous complexes for students and starters in Amsterdam: Little Manhattan and De Spartaan which have more than 1,200 micro-apartments.

The company has just started work on Don Bosco in Amsterdam-West which will have 429 units for young professionals. Cobana with 385 micro-apartments is underway in Rotterdam.

Could a custom made tiny house could be your affordable new home?

De Lofts, now being built in Amsterdam’s Amstelkwartier, will have 212 living units of just 32 m2, but more than 1,000 signed up when the project went public.  And some 10,000 people expressed interest when property developer Change announced its second micro-apartment complex with 596 units in Amsterdam-Zuidoost.

While Change develops projects for the social rental market most micro-apartments are rented out for above the €710 rent-controlled threshold. IC’s micro-homes, for example, cost €885 a month, including service costs, heating and internet.

Last year there was a major row in Amsterdam when it emerged a private developer was renting out a complex of 120 apartments of some 30 m2 in Noord for €1,250 each. The city council had originally approved the development for student accommodation.

Do you live in a micro-apartment? We’d like to hear from you: email editor@dutchnews.nl