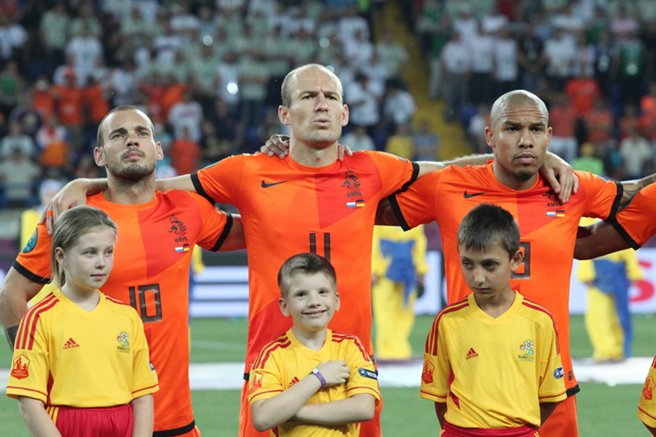 Wesley Sneijder has played his last game for the Dutch national team after an international career spanning nearly 15 years and a record 133 caps.

The 33-year-old, currently plying his trade with Al Gharafa in Qatar, confirmed his retirement on Twitter after meeting new national head coach Ronald Koeman, who said he wanted to promote the next generation of Dutch footballers.

‘Wesley is one of the best Dutch footballers of recent years,’ said Koeman in a statement on the KNVB’s website. ‘A great player with a great presence on the field. But I want to select players for the future and build a new Oranje, so I have to take decisions.’

Sneijder made his debut for Oranje in a friendly match against Portugal in April 2003, less than two months after breaking into Ajax’s first team as an 18-year-old. His real breakthrough came in November that year when he masterminded a 6-0 win against Scotland in the second leg of the play-offs for Euro 2004, after the Netherlands had lost the first leg 1-0.

He was the linchpin of the team that reached the 2010 World Cup final, scoring five goals from midfield to become the tournament’s joint top scorer. Four years later he won his 100th international cap as the Dutch shocked world champions Spain in their opening World Cup match, winning 5-1 on their way to the semi-finals.

As an Ajax player Sneijder won the league title in his debut season and the KNVB Cup twice before being sold for €27 million to Real Madrid in 2007. Two years later he joined Inter Milan, where he was instrumental in winning the treble of league, cup and Champions League in the 2009-10 season.

He later spent five years at Turkish club Galatasaray before buying himself out of his contract in July last year and moving to Qatar.