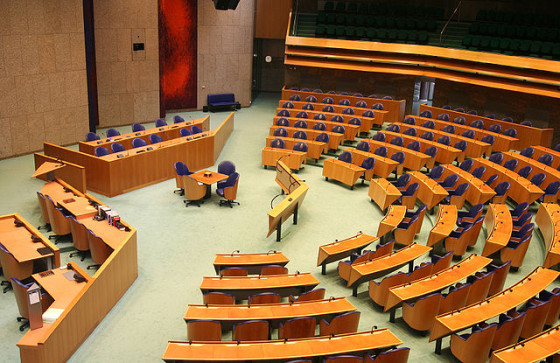 The man who jumped from the public balcony in the lower house of parliament in The Hague on Thursday had tried to commit suicide, broadcaster NOS said.

Television footage shows the shocked reaction of MP Arno Rutte who was about to start speaking when the incident took place. Parliament was debating organised crime at the time.

The man had tried to kill himself and had tied some sort of rope around his neck. The other end was tied to the balcony, NOS said, quoting a police spokesman.

The man, who has been taken away in an ambulance, is said to be a 65-year-old from Groenlo in the east of Gelderland. The Telegraaf says the man is a soft drugs activist who had been demonstrating outside the parliamentary complex for several weeks.

He had also announced his plans on Facebook, saying ‘I have to do this to shake up politicians’, the paper said.