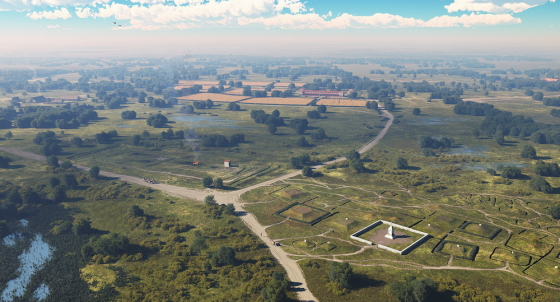 An artists impression of how the site might have looked. Illustration: RWS

A secret dig at the site of a new section of the A15 motorway has yielded a large Roman cemetery but no clues as to the provenance of its occupants, government roads department RWS announced this week.

The find, in a field at Bemmel near Zevenaar, dates from the 2nd or 3rd century AD and consists of 48 graves, some with their stone funerary urns still present. Four of the graves were found to be more or less intact, which is a first in the Netherlands. The skeleton of a baby, from the same period, was also among the remains. The graves were discovered at a depth of only 50 centimetres.

According to the archaeologists, who carried out the dig in secret for fear of treasure hunters, it is obvious the remains are those of wealthy Romans but as there are no known Roman settlements close to the site, it is unclear where they lived.

Among the funeral gifts were such luxury items as imported painted earthenware jars, plates and cups, and tableware consisting of glass bottles and decorated bronze jugs, cups and dishes. Although personal items did not usually accompany their owners in death, the archaeologists found clothing pins, mirrors, a pair of scissors and even a complete perfume bottle with its contents intact, RWS says.

Among the more unusual items were fragments of four parchment roll holders and a stone grave monument with a depiction of a woman.

Such gifts are more typical of Roman cities like Nijmegen, or high-ranking Roman officials in Belgium, Germany or France, RWS said. The best explanation therefore is that these were the inhabitants of a Roman villa near Bemmel, which would make it perhaps the most northerly position of a Roman villa in all of the Roman empire.

On April 27, 28 and 29 the objects will be presented to the public in Bemmel after which they will be put on show at the Valkhofmuseum in Nijmegen.