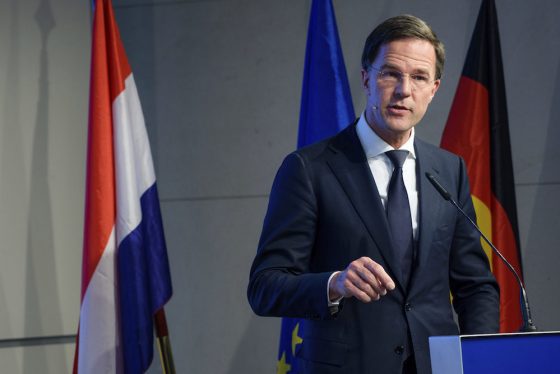 Mark Rutte outlines his views on the EU. Photo: Gregor Fischer/dpa via AP

The future of the Netherlands lies within the EU but the EU should focus on concrete projects and accept that its budget will be smaller, post Brexit, prime minister Mark Rutte said in a speech in Berlin.

Over the next few years the EU should focus on security and stability, the prime minister said. ‘I also want the EU to do more on the issues of security, stability, migration and climate change.

‘It has to. Because there’s no other choice. There’s an urgent need for an effective common foreign and security policy and a common asylum policy. Events in recent years have made this very clear.’

During his speech Rutte, the fourth-longest serving EU prime minister, outlined eight key proposals which he said are at the heart of the European message.

‘At its core, the original promise of Europe hasn’t changed in nearly 70 years: member states working together to bring each other to a higher level of prosperity, security and stability,’ the prime minister said. ‘There is just one key question: how can we deliver on that original promise and maintain it for future generations?’

The common foundation and willingness to make compromises has give us all so much, Rutte said.  ‘Yet, more and more it seems as if member states believe that agreements can be set aside when things aren’t going so well at home. As if Europe is a menu from which you can choose what you like and refuse what you don’t like. But Europe is not a menu. We need to be able to rely on ‘yes’ really meaning ‘yes’.

He also warned about the impact of decisions made in Brussels on public opinion.  ‘We shouldn’t underestimate how vulnerable public sentiment is in many countries. In our country, in Germany and elsewhere. People can see that the EU often promises more than it delivers. I see it too.’

The prime minister also said that a level playing field in terms of jobs should not give rise to unfair competition.

‘It’s impossible to explain to Dutch and German plumbers and bricklayers why their jobs are being taken by colleagues from other countries working for less than the minimum wage under sham employment arrangements.

‘Nor is it fair that Polish and Slovak plumbers and bricklayers have to accept worse terms of employment than their German or Dutch counterparts,’ he said.

In terms of the EU budget, Rutte said it is time to accept that the UK is leaving the EU and that the budget will be smaller. ‘Let me be very clear,’ he said. ‘My goal for the multi-annual budget is this: no increase in contributions, but better results within a smaller budget.

‘The Netherlands wants the European Union to seize this chance to deliver on the promise that cooperation leads to added value. The EU27 cannot fill the Brexit gap, and we can’t face the 21st century with a budget that reflects the realities of decades ago.

‘There’s lots of talk about the EU’s new priorities: sustainability, climate, security, migration, innovation. Funding new priorities will inevitably impact on current programmes and subsidies. But let’s be realistic: 70% of the Union’s expenditure goes to agriculture and structural funds. Spending a little less on these things will make room for our new priorities. It’s time to make choices. And practise what we preach.’

Read the speech (in English)