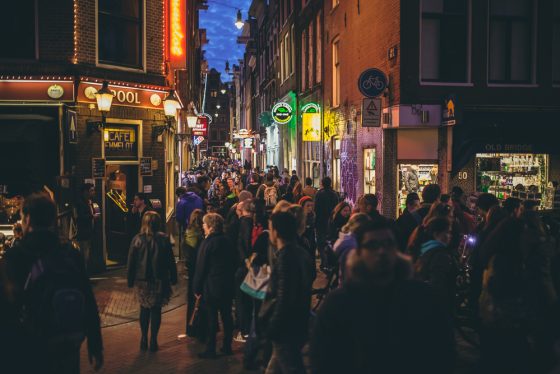 Measures to alleviate nuisance noise in the centre of Amsterdam have failed, according to a new report  by the city’s ombudsman, published on Wednesday.

The report is a follow-up to ombudsman Arre Zuurmond’s earlier round-up of city centre nuisances of 2016 which prompted a number of measures by the then mayor Eberhard van der Laan. Zuurmond spent a night in the area around Leidseplein at the time and likened the noise to ‘a stadium after a game when the public spills out onto the streets’.

The report ‘Feesten of Beesten (partying or raising Hell) resulted in a city centre offensive with 140 officers to tackle disturbances and a ban on stopping for taxis. The city council also tried to control the number of people in the centre by limiting holiday lets, raising tourist tax and banning the bierfiets.

But another night spent in the centre and extensive talks with city centre residents showed Zuurmond that the problem is far from solved.

He cites one woman living in the Korte Leidsedwarsstraat who has experienced noise nuisance for years, with hundreds of people passing her house, peeing and defecating in the street, and who was threatened and assaulted by local bar owners. Help from the police was not forthcoming nor could she get the relevant camera footage.

Zuurmond, who made a short film called Urban Jungle about his experiences, says there is an ‘intolerable absence of authority’ in the city centre.

In a reaction police said the number of policemen and scheduling issues made it impossible to police the city centre ‘adequately and sufficiently’. But both Zuurmond and the police believe the solution is not simply to increase the number of officers on the beat.

In his report, Zuurmond says ‘clever policing’ is the answer, with more recourse to technology, more legal possibilities for the city council to intervene and better cooperation with the tax office and other government services to tackle offending bar owners and illegal taxis.

But first and foremost, the trust between the council and the inhabitants needs to be restored. ‘The people living in the centre have been left out in the cold and we cannot combat noise nuisance without them,’ the ombudsman writes.