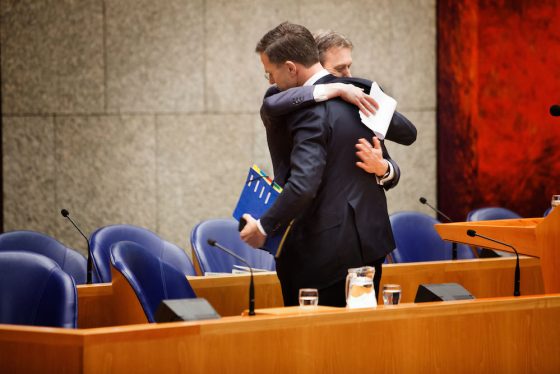 Prime minister Mark Rutte survived a no confidence vote on Tuesday evening over his handling of the Halbe Zijlstra affair. Zijlstra stood down as foreign minister earlier in the day after admitting he lied about a meeting with Russian president Vladimir Putin.

Rutte told MPs during an emotional gathering that he had under-estimated the impact of Zijlstra’s lie and had thought he could continue in the job because he had a good explanation.

‘I thought it was a sin, but not a deadly sin,’ Rutte said.

He confirmed that Zijlstra had told him about the lie two weeks previously, after the foreign minister was contacted by the Volkskrant who wanted an interview. The delay was due to Zijlstra’s busy diary and the fact he was ill for a time, Rutte said.

‘There was no deliberate attempt to delay, but it would have been better if done sooner,’ Rutte told MPs.

Opposition MPs said they did not believe Rutte had so under-estimated the situation and said they could not imagine that the prime minister had not discussed such an explosive situation with others.

‘There is a real lack of leadership,’ said Forum voor Democratie’sThierry Baudet. ‘How can the prime minister have wanted to keep Zijlstra on as foreign minister?’

Tunakan Kuzu, leader of Denk, said during the debate: ‘The reputation of our country has taken an enormous international hit’.

Rutte survived the no-confidence vote by 43 votes to 101. The Socialists, PVV, Denk, pro-animal PvdD, Fvd and 50Plus all backed the motion.