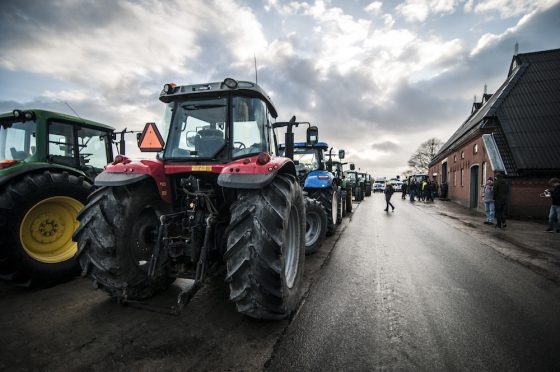 Groningen farmers took their protest about the earthquake damage to The Hague on Thursday. Photo: Anjo de Haan / HH

Economic affairs minister Erik Wiebes said on Thursday afternoon that he will follow the mining inspectorate’s advice to slash Groningen gas production ‘as soon as possible’.

‘We have to go back to 12 billion cubic metres and that is almost half,’ he said. ‘It will be an enormous social challenge.’ Wiebes said he would brief parliament at the end of March on how the plans to achieve the cutbacks.

On Thursday morning, the state mining inspectorate said the extraction of natural gas from under Groningen province should be massively scaled back to reduce the risk of more earthquakes.

In addition, the inspectors say no more gas may be pumped from the fields around Loppersum, which was hit last month by an earthquake which registered 3.4 on the Richter scale.

The cutbacks will have a considerable impact on the treasury which earns an estimated €150m from each billion cubic metres of gas. Wiebes said earlier that he would not take the impact on the state’s finances into account when deciding how to proceed.

The Groningen field is one of the world’s largest gas fields with an estimated 2,800 billion cubic metres and has so far generated some €290bn for the treasury, much of which has been spent on infrastructure.

There will also be an impact on seven million Dutch households, large companies and in the Netherlands surrounding countries which have come to rely on the low calorie gas from Groningen.

Last month, Wiebes wrote to 200 of the biggest Dutch firms telling them they had to stop using Groningen gas within four years. Parliament has also passed a motion which would no longer make it a requirement to connect new homes to the gas grid.

Meanwhile, a group of some 50 farmers were banned from driving their tractors into The Hague on Thursday to take part in a protest outside parliament in support of their campaign for damages.

The farmers want guarantees that they will be compensated for the damage to their land and want to be sure that Shell and ExxonMobile, who jointly own gas company NAM, will take responsibility.

But they were stopped from entering the cities with the tractors because of the risk to public safety.