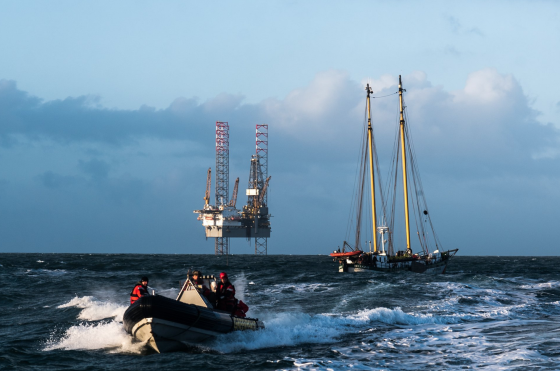 Police in the Groningen port of Lauwersoog have arrested three members of the environmental organisation Greenpeace for getting too close to a drilling rig off the coast of the Wadden island of Schiermonnikoog.

The three were taking part in a protest against test drilling for gas but had returned to the mainland because they were seasick in the rough seas, broadcaster NOS said.

The platform, owned by a company called Hansa Hydrocarbons, is some 20km into the North Sea and was occupied by several Greenpeace protesters on Thursday.

Protests are also taking place on the Wadden Sea island itself. The island’s mayor Ineke van Gent, who has joined the protestors, told local broadcaster RTV Noord: ‘We should be moving over to sustainable energy. You should not be drilling for gas near a vulnerable nature reserve.’

Economic affairs minister Erik Wiebes said on Thursday that locals should not be worried about the test drilling. ‘You hardly see the rig,’ he said. ‘On a clear day, if you look closely, you can see a spot.’

British company Hansa Hydrocarbons is trying to establish if the gas field in the area is big enough to exploit commercially.