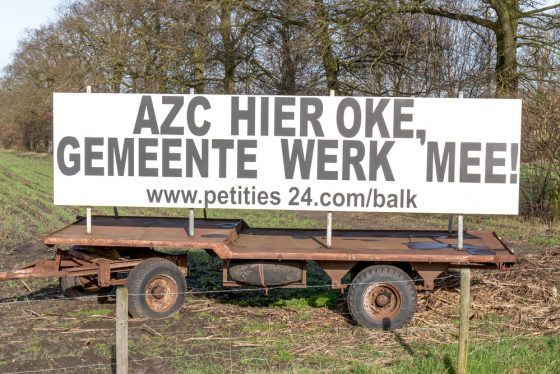 Locals are at no more risk of being the victim of a crime if a refugee centre is set up in their neighbourhood than they were before, according to a new report by the justice ministry’s WODC research centre.

The research was commissioned following a string of violent protests against refugee centre location plans in 2014 and 2015 when refugee numbers surged.

The WODC research shows that there is a 0.03% increase in the risk of being the victim of a criminal offence near a refugee centre – an rise which is not statistically significant, the Volkskrant said.

‘By far the majority of refugees are focused on making something of their lives,’ criminologist Jan van Dijk of Tilburg University told the Volkskrant. The WODC’s conclusions point to ‘projected fears’ and ‘vote-mongering by parties such as the PVV,’ he said.

The WODC compared crime rates in areas with and without refugee centres in 2005, 2010 and 2015, and compared the criminal profile of asylum seekers with the general population.

Compared with their peers in Dutch society, with a similar age and socio-economic class, asylum seekers are slightly under-represented in the statistics, including for sex crimes, the VK quoted the research as showing.

The research did show that refugees do commit crimes – usually petty offences such as shoplifting. Two-thirds of the perpetrators are young men from countries considered to be safe and unlikely to win official refugee status.

Els Visser, who took part in the protests against a refugee centre in Beverwaard, on the edge of Rotterdam, in 2015 told the Volkskrant she had got it wrong.

‘I have no problem with these people at all,’ she said. ‘We were driven mad by the stories doing the rounds, that women would be raped if they went outside… now I think I let myself be swept away when I really did not know what to expect.’