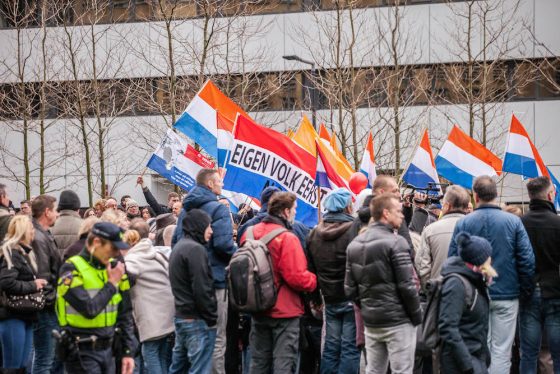 The orange, white and blue flag was used by the Dutch NSB. Photo: Leander Photography via HH

Some 700 people, some carrying orange, white and blue flags used by the Dutch Nazi party during World War II, gathered in Rotterdam on Saturday afternoon for a demonstration called by PVV leader Geert Wilders.

Wilders had called the demo to kick of the PVV’s election campaign where the party is competing against two other populist right-wing parties – Leefbaar Rotterdam and the Forum voor Democratie.

Wilders was at the rally for around 10 minutes, according to RTL correspondent Frits Wester. ‘He shouted a few things through a megaphone and then he was gone. There were no riots or anything,’ Wester said.

Several members of Denk, the party founded by former Labour MPs, held a counter demonstration but were kept well away from the PVV supporters.

Wilders’ support has been declining in the polls but the PVV is contesting the March 21 elections in some 30 council areas.

Meanwhile, on Friday, some 2,000 people took part in a ‘politically incorrect debate’ to work out new ways of dealing with ‘the problems surrounding immigration,’ as one of the organisers put it.

Among the speakers at the gathering in Rijswijk were former politician Rita Verdonk, pro-Zwarte Piet activist Jenny Douwes and Canadian professor Jordan Peterson, who is on a book tour of Europe.

On Sunday, De Nederlandse Leeuw (the Dutch lion), which organised the event, published a list of 10 recommendations which had been drawn up at the meeting.

These included stimulating Dutch people to have more children and supporting bigger families as well as denying people access to the Dutch healthcare system who had not worked for five years.

The organisation has promised a list of 26 ideas when it publishes a full report on the meeting at a later date.