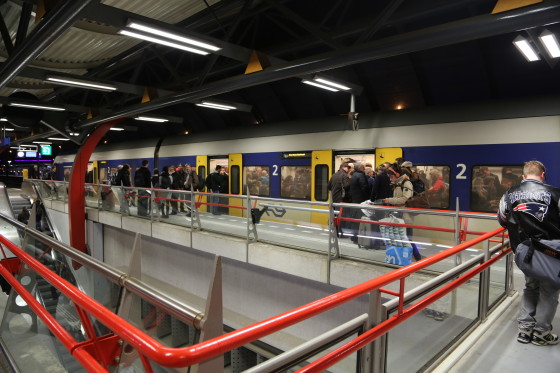 Dutch rail company NS said on Friday morning normal service is being resumed in most of the country following Thursday’s railway chaos.

Rail services did not resume late into the night after Thursday’s severe storm, leaving tens of thousands of people stranded. Kilometres of track were closed because of blown-down trees or problems with the overhead cabling

‘It is good news. Most trains are operational,’ a spokesman for the NS told broadcaster NOS. However, there are still problems between Leiden – Schiphol, Barneveld – Ede-Wageningen, Arnhem – Zutphen and Eindhoven and Weert, either because of trees on the track or problems with the overhead cabling.

Railway workers were working round the clock to clear up the remaining problems and by 10.30am all services should be back to normal, the spokesman said.

Passengers are being urged to check travel planners for the latest information and the spokesman said shorter trains or buses may be operating on some routes.

The lack of trains led to long queues outside stations as passengers waited for taxis or for friends and family to pick them up. Spontaneous car sharing initiatives such as #stormpoolen also sprang up via social media.