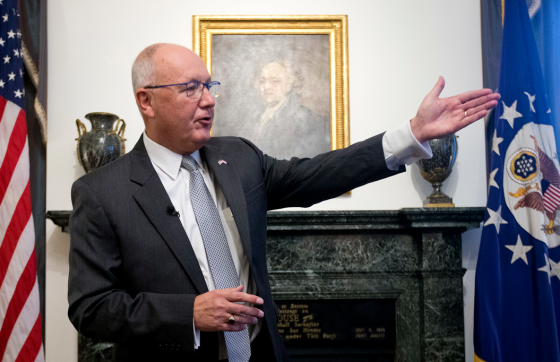 The US state department has distanced itself from remarks made by the new ambassador to the Netherlands, in which he said there are ‘no-go’ areas in the Netherlands and that politicians are being set on fire, the Washington Post reported.

During a news conference, undersecretary Steve Goldstein told reporters that Pete Hoekstra, had ‘made comments that should not have been made’ when asked about Hoekstra’s claims

‘The Ambassador made mistakes in 2015,’ said Goldstein. ‘Those comments were not the position of the state department, and you will never hear those words from this podium.’

Nevertheless, Goldstein refused to say that Hoekstra’s comments were inaccurate, the paper pointed out.

Hoekstra is under fire in the Netherlands for making the comments in a speech in 2015, then calling the reporting of his comments fake news.

On Wednesday, after meeting the king to hand over his ambassador’s credentials, he declined to answer questions about the affair when asked repeatedly by Dutch reporters.

Today Dutch press welcomed @petehoekstra as new ambassador to the Netherlands. In 2015 Hoekstra said Dutch”politicians are being burned” (not true). The only one who did get burned today is… Hoekstra himself. By refusing to answer our questions. pic.twitter.com/Dv2aalbhDP

According to a recent report by CNN, Hoekstra has regularly made unsubstantiated claims about ‘no-go’ zones and speculated that 15% of Muslims could be radical jihadis.

He has also suggested that former president Barrack Obama may have been aiding the rise of radical Islam on purpose, the CNN report said.

Goldstein also told the news conference that Hoekstra has an interview scheduled with a Dutch media outlet on Friday, but did not name the organisation.

‘And he also plans over the weekend to be available within many of the communities in the capital, including Muslim communities,’ he told reporters. ‘The department has had conversations with the ambassador. The ambassador wants to get this behind him.’