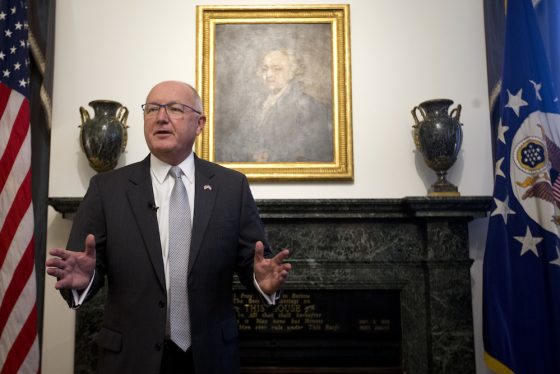 The US and other foreign media have reported widely on the ‘roasting’ the new US ambassador to the Netherlands received from Dutch reporters when he tried to brush off statements about no-go areas and politicians being burned.

Pete Hoekstra gave his first news conference on Wednesday at which he was repeatedly asked by journalists about his claims that there are no go areas in the Netherlands and that cars and politicians are being set on fire because of radical Islam.

Hoekstra made the comments during a speech at a conference organised by the right-wing David Horowitz Freedom Center in 2015, which has donated over €150,000 to Dutch anti-Islam campaigner Geert Wilders.

First asked about his comments by a Dutch reporter in December, Hoekstra denied making the statements, dismissing them as fake news.

At Wednesday’s press conference, Hoekstra again refused to withdraw his claims. Asked by journalists about the controversy, Hoekstra declined to comment on them directly, saying instead: ‘This is about the views and the policies of the United States of America, as directed by this administration.’

He was then repeatedly pressed on the issue by journalists. ‘This is the Netherlands, you have to answer questions,’ one reporter said.

Today Dutch press welcomed @petehoekstra as new ambassador to the Netherlands. In 2015 Hoekstra said Dutch”politicians are being burned” (not true). The only one who did get burned today is… Hoekstra himself. By refusing to answer our questions. pic.twitter.com/Dv2aalbhDP

‘Dutch reporters stun Trumps ambassador by pressing to admit he lied about ‘no-go zones’, said The Intercept, which went on to urge White House correspondents to study the footage.

‘Dutch media roasts new US ambassador Peter Hoekstra for dodging questions about past anti-Islam comments,’ was the headline in the Chicago Tribune.

‘Trump’s Netherlands ambassador was asked to name a person ‘burned’ because of Islam. He couldn’t,’ stated the Washington Post. ‘Peter Hoekstra, the newly minted U.S. ambassador to the Netherlands, held his first conference with the Dutch media at his new residence in The Hague Wednesday. It did not go well.’

RTL political correspondent Roel Geeraedts, told the Washington Post in a telephone interview: ‘We were all astonished he did not want to take back the comment. It was awkward, to be honest.’

Hoekstra, who was born in Groningen and moved to the US at the age of two, is a staunch conservative who opposes gay marriage and abortion and is pro the death penalty.

According to a recent report by CNN, Hoekstra has regularly made unsubstantiated claims about ‘no-go’ zones and speculated that 15% of Muslims could be radical jihadis.

He has also suggested that former president Barrack Obama may have been aiding the rise of radical Islam on purpose, the CNN report said.