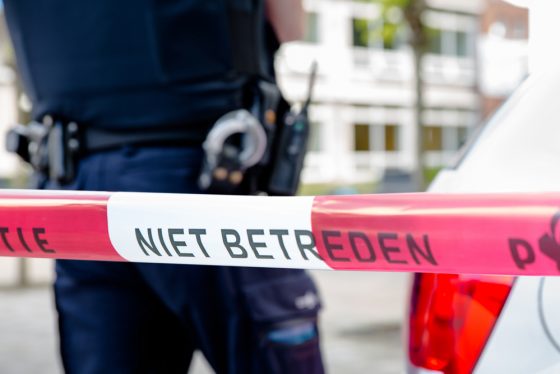 A team of 30 detectives are investigating Friday’s fatal shooting at a youth centre in central Amsterdam on Friday evening in which one teenager was shot dead and two others injured.

Locals and family of the dead boy, a 17-year-old intern, took to the streets at the weekend to call on mayor Jozias van Aartsen to tackle the violence in their neighbourhood following a spate of drug-related shootings.

The uncle of the dead teenager, named as Mohammed Bouchikhi, took to Facebook at the weekend calling for action. ‘I have lost my dear, innocent nephew who was in the firing line of these madmen,’ Ouled Ali wrote. ‘He died, a 20 year old innocent girl was seriously injured and a lot of small children will be traumatised by this event.’

The shooting took place around 7pm on Friday when two masked men armed with automatic weapons entered the youth centre in the Grote Wittenburgerstraat saying they were looking for someone. They then started shooting, killing 17 year-old Bouchikhi who worked at the youth centre as a trainee. Another trainee, a 20 year-old woman, was shot in the leg.

The gunmen also shot 19 year-old Gianni L who police think may have been the real target. He was involved in another shooting close to the youth centre last year.

At the time of the shooting the youth centre was hosting a children’s cookery class and several other activities.

According to an analysis in the Parool the shootings are drugs related.

‘Many of these youngsters come from broken homes and hardly have any schooling and it’s likely many of them have learning difficulties or some sort of psychiatric problem,’ the paper said.

‘They live at three minutes from a city centre where drug tourism is rife and where there is an enormous market for drugs, fake drugs, cocaine and pills,’ the paper writes.

Meanwhile, locals have had enough and are urging the mayor to take action.

‘You see these boys hanging around at night and it’s intimidating. I think they are drugs runners who are driving up and down to their wealthy clients in the grachtengordel delivering cocaine,’ one local told het Parool.

André Agterof, who chairs the local community organisation, said the situation is desperate. ‘Who in the world would go into a youth centre full of children and shoot the place up. Something has to happen to help this neighbourhood. We must protect the children,’ he told the paper.

Van Aartsen called the incident a ‘ruthless shooting’ made worse by the fact that children were put in danger. He promised to meet police and the public prosecution department to come up with measures to tackle the situation.

‘This kind of gun-related violence is a very serious disturbance of the peace. Amsterdammers should be able to feel safe in their neighbourhoods,’ he said.