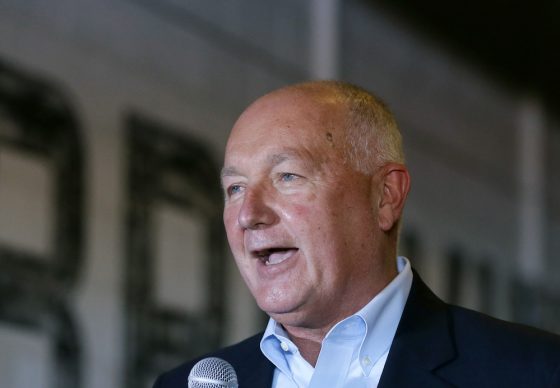 The new US ambassador to the Netherlands has apologised for telling a television reporter that claims that he has spoken of no-go areas in parts of the country and politicians being set on fire as ‘fake news’.

Pete Hoekstra contradicted himself twice on in the NOS interview, firstly by denying he said there were no-go zones and then later by denying he had used the term ‘fake news’.

‘I made certain remarks in 2015 and regret the exchange during the Nieuwsuur interview. Please accept my apology,’ Hoekstra shared on Twitter.

Hoekstra went on to say that as ambassador to the Netherlands: ‘I look forward to the opportunity to learn, to listen and to move on the spirit of peace and friendship.’

Hoekstra made the comments during a speech at a conference organised by the right-wing David Horowitz Freedom Center in 2015, which has donated over €150,000 to Dutch anti-Islam campaigner Geert Wilders

In this month’s interview with current affairs programme Nieuwsuur, Pete Hoekstra told NOS correspondent Wouter Zwart he had never said such things. ‘I didn’t say that. That is actually an incorrect statement. We would call it fake news,’ Hoekstra said.

However, the new ambassador can be seen clearly making the statements in a video recording from 2015. ‘And yes, there are no go areas in the Netherlands,’ Hoekstra states.

Hoekstra will take up his position in January. He is known to be a supporter of Trump’s policy on the migration of Muslims to the United States and Europe. Hoekstra also opposes gay marriage and abortion, both of which are legal in the Netherlands.

Prime minister Mark Rutte told reporters at his weekly press conference that he was looking forward to Hoekstra’s arrival.

The US, he said, ‘is our most important ally, the leader of the free world.’ He declined to comment on the fake news row, saying only that: ‘Hoekstra and I are first going to get to know each other and build up a relationship.’