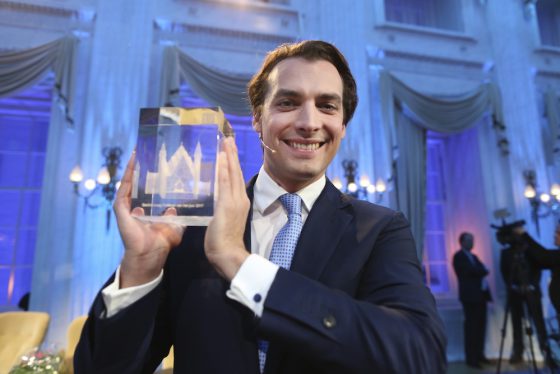 Thierry Baudet, leader of the right-wing Forum voor Democratie party, has been voted politician of the year by the viewers of television current affairs show EenVandaag.

Baudet, whose party won two seats in the March general election but is soaring in the polls, took 39% of the vote. VVD MP Klaas Dijkhoff was second with 18% and GroenLinks leader Jesse Klaver third with 14%. Klaver won the vote among younger viewers.

Baudet was praised by viewers for his verbal strengths, his ‘freshness’ and for making subjects such as integration, referendums and jobs-for-the-boys topics of discussion. Some 44,000 people took part in the vote.

The right-winger, who has described himself as the Netherlands foremost intellectual and moved a grand piano into his parliamentary office, came under fire during the election campaign for saying he feared ‘a homeopathic dilution’ of the Dutch population as a result of immigration.

Geert Wilders, leader of the anti-immigration PVV, whose popularity has been dented by Baudet, won the EenVandaag award in 2013, 2015 and 2016