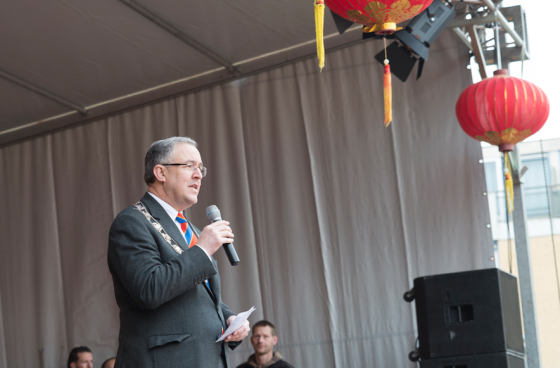 The debate about Islam in the Netherlands has become so tense that it should be put on hold for a while, Rotterdam’s Muslim mayor Ahmed Aboutaleb has told Trouw in an interview.

‘Some debates should wait until the time is right,’ Aboutaleb said. Some politicians and ‘opinion makers’ are forcing the issue with ‘steam and boiling water,’ he said. ‘The Netherlands’ intellectuals consider the time ripe for certain developments but most of the Dutch are not that ready. I am a real believer in the gradual approach.’

While Aboutaleb supports increasing the visibility of religion, he does not compare the Muslim call to prayer to church bells. There is a long tradition of Christianity in the Netherlands, and this is why the city council does not organise events over the Christmas break, he said.

Islam has had a foothold in the Netherlands for 50 years and Muslims are now so emancipated that they are able to build their own mosques, the mayor points out.

‘These sorts of issues are part of social developments and at a certain point they may become more accepted. In 10 or 20 years, we may come to the point that more is done to mark the end of Ramadan, for example.’

The same goes for the debate about headscarves and police uniform, said Aboutaleb, who supports the status quo. ‘There is no point in having this debate now,’ he said.

Aboutaleb came to the Netherlands at the age of 15 as the son of an imam. He became the first Muslim mayor in the Netherlands when he took over the helm in Rotterdam in 2009.

In 2015, he broke with the Labour party line and said Dutch nationals who have decided they want to travel to Syria to join Islamic militias should be allowed to go but should be banned from coming back to the Netherlands.

Aboutaleb also hit the headlines after the terrorist attacks in Paris when he said that the time is right to wipe out ISIS.