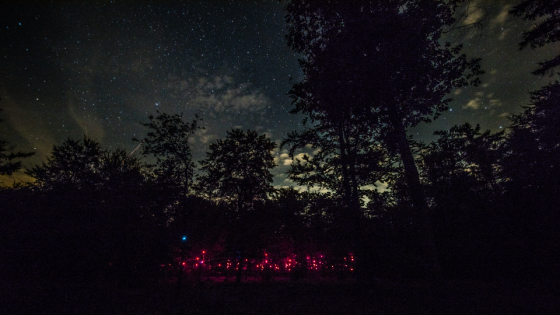 The Pixies in action. Photo: Knelis via WERC

A Dutch art collective is lighting up the woods in Drenthe with a host of ‘pixies’, illuminated digital organisms which, their makers hope, will come to imitate the group intelligence of a swarm of starlings or a school of fish.

The Groningen-based collective WERC sought the collaboration of Dutch forestry commission Staatsbosbeheer and they were eventually given permission to conduct their experiment at the Boomkroonpad nature centre in Drouwen, in the province of Drenthe.

The pixies light up when people come near and guide them along the path. Depending on the number and proximity of the people, more pixies ‘wake up’ and join the conversation, sending messages to each other until a network is created which takes on a communicative life of its own.

Apart from a fairy tale experience on dark autumnal evenings, the walk through the woods is about communication, both between people and pixies but first and foremost between the pixies themselves.

Olav Huizer, designer and maker of the pixi, has long been fascinated by the communication that takes place between the members of a swarm of starlings, and other animals that behave as one.

‘They all keep to the same rule. In the case of the pixies we make the rule but we are not in control of the communication between the individual pixies,’ Huizer says. ‘It means movements are created that are bigger than the sum of their parts.’

The pixie path has proved very popular with visitors. Tickets for this year have been sold out already but those who want to join the Pixies next year should book their tickets now.

You can watch a video of the Pixies in action here.