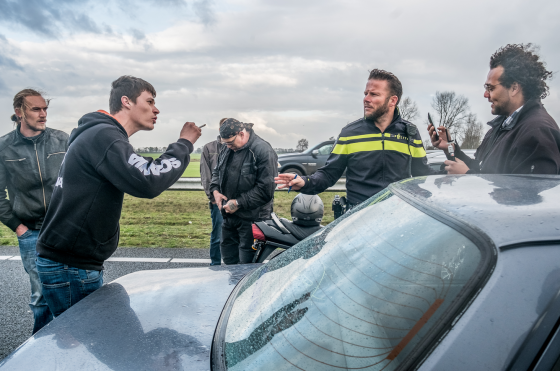 The buses containing anti-racism campaigners were heading for Dokkum to take part in a legal demonstration at a pre-arranged location. However, as the buses neared the town of Joure, several vehicles driven by people from the pro-Piet camp pulled up in front, forcing the drivers to stop.

Campaigner Jerry Afriyie told RTL news a motorbike suddenly appeared in front of the bus, causing it to brake sharply. ‘It was too insane for words,’ he said. ‘They are stopping us from exercising our democratic right to demonstrate.’

The police claim it took 20 to 25 minutes to clear the road but said there were no arrests. Other reports suggest the blockade could have lasted up to an hour.

The buses carrying supporters of the Kick Out Zwarte Piet movement continued their journey to Dokkum under riot police escort. NRC journalist Kasper van Laarhoven, who was travelling in one of the buses, said after 20 minutes the demonstrators realised that they were not heading for Dokkum after all.

The driver pulled up on the hard shoulder and a police officer entered the bus, telling the occupants that the demonstration had been banned after all and that they were being escorted back to Amsterdam and Rotterdam.

‘There were indications that there could be more blockades and that pro Zwarte Piet activists were already in the town,’ mayor Marga Waanders told a press conference later Saturday afternoon.

Asked if the decision to ban the demonstration meant that Piet supporters had had their way, the mayor said: ‘Safety is paramount – the safety of both the anti and pro camps. I am happy that the blockade only led to minor damage to cars and that no-one was hurt.’ 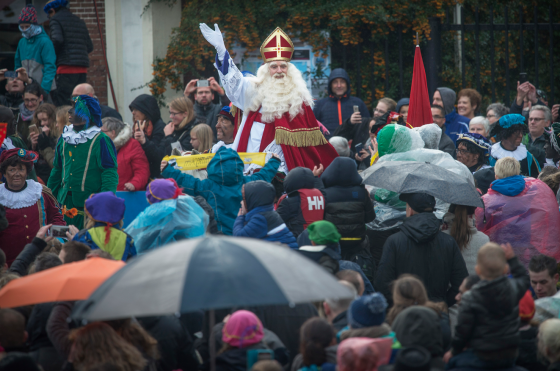 The boat carrying Sinterklaas arrived in Dokkum around 12.30 and the welcome ceremony took place without incident. Most of the pieten on board the boat were traditional versions of the Sint’s helper, played by white people in blackface make-up. There were also several pieten with sooty faces.

According to research by the AD, most local councils are planning to stick to the traditional black or brown-faced pieten and just 17 will include pieten with sooty faces in their parades.

Zwarte Piet is traditionally played by a white person in blackface makeup but over the years protests against the racist stereotype have been growing, culminating in demonstrations and scores of arrests.

Dutch celebrities, including actors who have played Zwarte Piet, have also called for change.

Now in some towns and cities, the blackface pieten are being replaced by other versions, including pieten with different coloured makeup and sooty smudges to show they have been down chimneys to deliver gifts.

Amsterdam has said it will move further away from the stereotyped blackface make-up and page attire at its official Sinterklaas parade on November 19.

In the capital, Sint Nicholas will be accompanied by almost 400 pieten with long, wavy brown hair and costumes based on the clothes of 16th century Spanish noblemen. Their outfits will also sport the three Andreas crosses to denote Amsterdam.