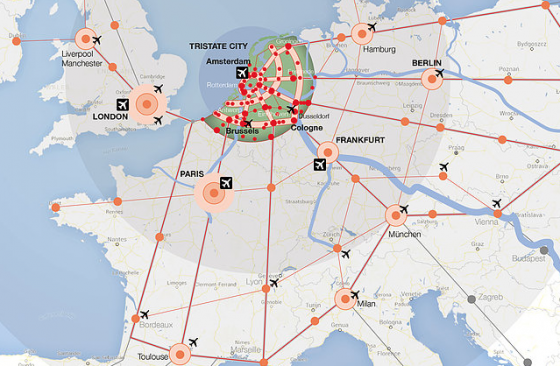 A group of institutional investors in the Netherlands have joined forces to present the Netherlands plus parts of Belgium and Germany as a single city network named Tristate City.

The project, backed by Dutch employers organisation VNO-NCW, says the region’s population of 30 million people creates a ‘sustainable urban power house’. The project’s supporters include property developers and pension funds as well as Utrecht’s economic board.

Dutch cities, the organisation says, are too small to compete in what it calls the ‘battle of the cities’, in which mega cities compete for investment and talent.

By treating the Netherlands as an urbanised delta with 17 million inhabitants, the project’s supporters say that are creating a very strong player in this ‘battle of the titans.’

‘Our city marketing is too fragmented and inefficient,’ the project website says. ‘In practice, the Dutch cities compete with each other abroad.’ Amsterdam Metropool, Brainport Eindhoven, Twentestad, Ede Food Valley, Regio Groningen Assen and Dairy Delta are just some of the names Dutch regions use when marketing themselves abroad.

The Netherlands must present itself as one of the ‘most powerful and sustainable city networks in the world,’ the project’s backers say.

‘It is about how Dutch companies present themselves to companies such as Apple or big Chinese firms,’ Prologis Benelux director Bram Verhoeven told the Financieele Dagblad.

Amsterdam, Rotterdam, Utrecht and The Hague are also part of another project known as the Holland Metropole in which the big four cities present themselves as single urban area with four centres each with their own speciality.