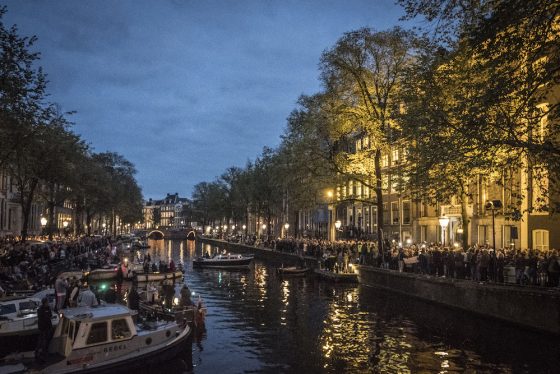 Around 1,000 people packed into Amsterdam’s Herengracht on Wednesday evening to pay tribute to the city’s mayor Eberhard van der Laan, who has terminal lung cancer.

Van der Laan stood down from public duties on Monday after telling Amsterdammers in an open letter that his doctors can do no more for him.

The crowd paid tribute to the mayor outside his official residence and sang Aan de Amsterdamse Grachten, said to be one of his favourite songs.

The mayor’s wife Femke spoke to the group and said that although the mayor could not be with them himself, he had enjoyed their applause and had taken great strength from it.

‘We have shown Eberhard that he not only loves this city, but that Amsterdam really loves him too,’ one of the organisers is quoted as saying in the Parool.

Broadcaster NOS had a live stream of the event. The crowd start to sing at around 10 minutes.