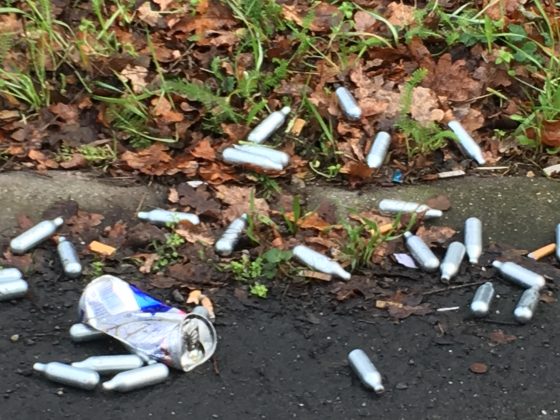 Laughing gas capsules dumped by the side of a road in Amsterdam. Photo: DutchNews.nl

Dozens of little companies have sprung up in the Netherlands selling and delivering laughing gas to party goers since courts ruled the gas should not be treated as a medicinal drug, the Volkskrant said on Friday.

Chamber of Trade records show lots of new companies with names like Partygas and Lachgas Express who deliver nitrous oxide plus balloons to your home, the paper said.

Since the Dutch Supreme Court ruling in February 2016, the sale of laughing gas has been supervised by the Dutch food and product safety board because nitrous oxide no longer falls under Dutch legislation on medicines.

Nitrous oxide is still viewed as an important anaesthetic, tranquilliser and painkiller but its use as been on the rise at concerts, nightclubs and festivals for some time.

One dealer, Tim de Wit, told the paper he earned a couple of hundred euros a weekend distributing the gas to his clients in the Gooi region. ‘On King’s Day I had a stall and earned €2,000,’ the 25-year-old said.

The Trimbos addiction clinic said it is aware of very few instances when people have gotten into difficulty using nitrous oxide but this is mainly when they have also been drinking too much.

However, the Guardian reported last year that according to Britain’s Advisory Council on the Misuse of Drugs there were five deaths in Britain in 2010 and one in 2011 related to its use.

‘These have been due to asphyxiation resulting from hypoxia (lack of oxygen). A number of the deaths involved the use of nitrous oxide in an enclosed space,’ ACMD chairman, Les Iversen, is quoted as saying.

Importers of the gas bulbs, traditionally used in whipped cream canisters, are not happy about the new trend.

‘We have set up a system to trace our bulbs so we can prevent them being abused,’ Kamil Luhn-Skibinski, export manager at Austrian producer Isi, told the paper. ‘They are meant to be used to spray whipped cream, nothing else.’

However, hospitality and food industry wholesaler XXXLhoreca told the paper demand for the bulbs had soared 400% in the past two years.