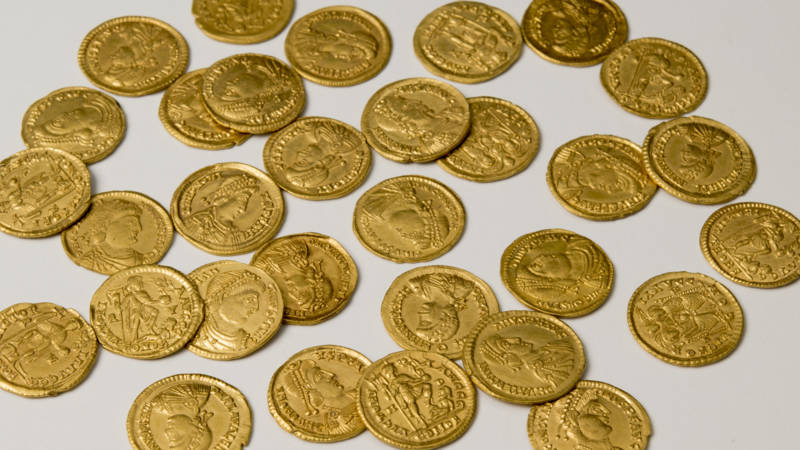 A hoard of coins dating from the final days of the Roman Empire has been found in an orchard in Gelderland.
Experts believe the fortune was buried by a Frankish military leader in the second half of the fifth century, when the area was part of the Western Roman Empire, which collapsed in 476AD.
Some of the 41 gold pieces unearthed in Lienden, near Veenendaal, bear the image of Majorian, one of the empire’s last rulers, who reigned for four years from 457. ‘On that basis we think this treasure was buried in around 460,’ said Nico Roymans, professor of archaeology at the Vrije Universiteit in Amsterdam.

The collection was publicly displayed for the first time on Friday morning at the Valkhof Museum in Nijmegen, which has acquired them on a long-term loan.
Roymans said the money was likely to have been paid to the Frankish warlord by the Romans in exchange for help with their troubles with local Germanic tribes such as the Visigoths.
He added that maps of the area from the 19th century show there used to be a burial mound at the spot where the coins were found, which suggests the owner planned to return and collect them. ‘The burial mound would have been easy to find in the late Roman era and maybe that was the reason for hiding the treasure there,’ said Roymans.
‘This find is unusual because it dates from so late in the period,’ said Stephan Mols, senior lecturer in archaeology at Nijmegen’s Radboud University. But we are getting more and more indications that the Romans recruited soldiers and sought help here.