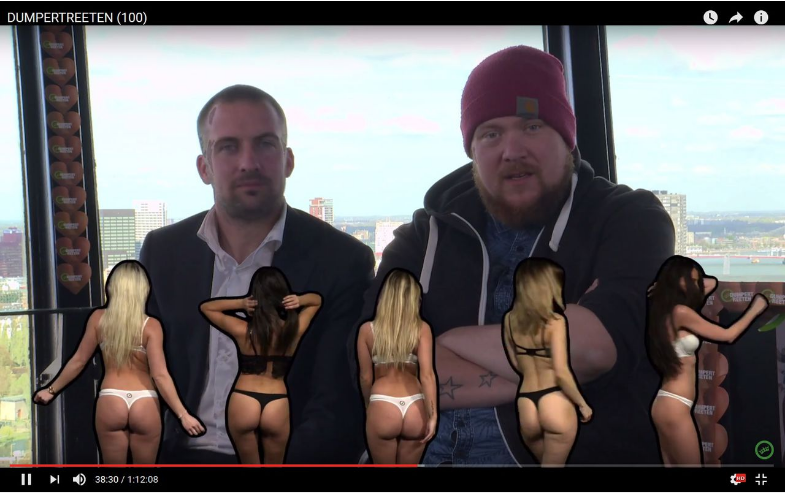 A screen shot from Dumpertreeten

A number of companies have said they will no longer advertise on shock blogs GeenStijl and Dumpert because of the volume of sexist and anti-women content they carry.

Food firm Hak, Ikea, refugee organisation Vluchtelingenwerk and cancer charity KWF are among the advertisers who have dropped the sites, after a columnist urged them to hit the websites where it hurts.

‘The trolls of GeenStijl are being paid by mainstream advertisers,’ NRC columnist Rosanne Hertzberger said last month. ‘They should realise what they are dealing with.’

The calls for a boycott of GeenStijl and its video arm Dumpert began at the end of April when Hertzberger wrote a column about the way Dumpert denigrated women by using naked female bottoms as stars to rate videos. Dumpertreeten means ‘Dumpert arses’, but is a pun on the English ‘rate’.

She called on advertisers to start boycotting the site, a plea taken up later by Loes Reijmer of the Volkskrant. GeenStijl responded by describing Hertzberger as a ‘stupid cow’ but went on to ask its readers if they would ‘do’ Reijmer. That resulted in hundreds of hate messages, including dozens of vicious rape fantasies.

‘GeenStijl is demonstrating exactly what we are talking about,’ Hertzberger said in the NRC, pointing out that the violent descriptions of attacking Reijmer were accompanied by adverts for holiday parks and baby buggies.

Most media bureaus which buy in online advertising space offer their advertisers targeted placements but also allow them to opt out of certain websites.

Not all family-friendly companies using GeenStijl and Dumpert say they will now boycott the sites. ‘We only exclude sites whose philosophy does not fit with ours,’ a spokesman for the Efteling theme park told the NRC. ‘The Efteling does not consider Dumpert to be a platform which only carries women-unfriendly content.’

The armed forces will also continue to advertise on the site, as will the organisers of the May 4 and 5 Remembrance Day and Liberation Day ceremonies.

GeenStijl told said in a reaction it is not worried if people consider the site sexist. ‘But don’t pretend we invented it, or it can’t be found elsewhere,’ the statement said, adding that the women whose bottoms are used for Dumpert were from a casting bureau and paid properly for their ‘outstanding’ work.

It also pointed to the hypocrisy of the AD and NRC, the latter of which carried an article about the ‘most beautiful bottoms in Brazil’.

Dumpert is said to reach two million people a month and GeenStijl 1.2 million. Both are owned by the Telegraaf Media Group.