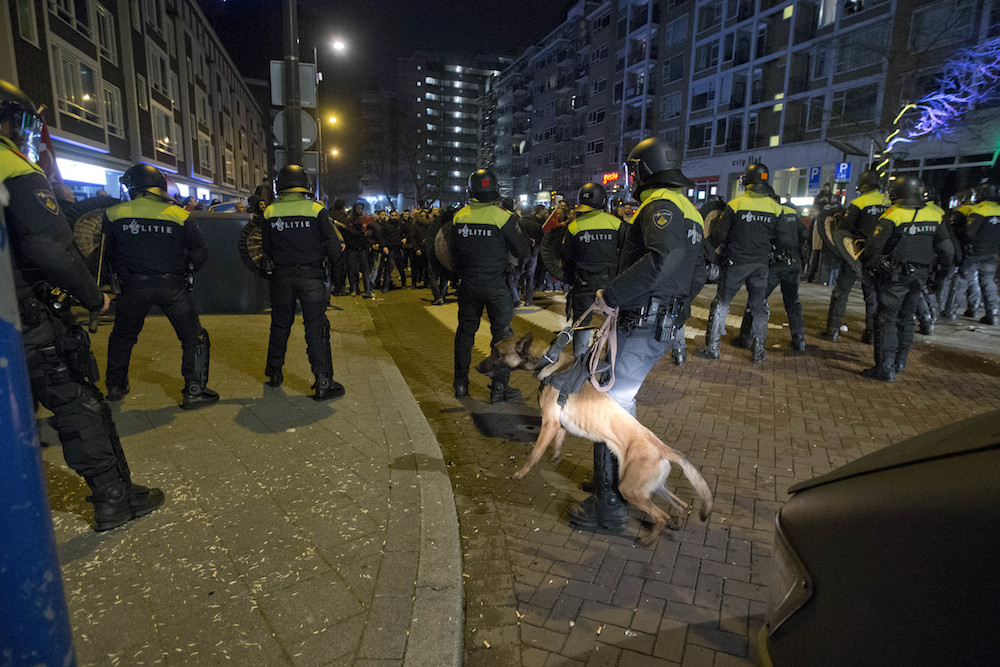 The diplomatic row between the Netherlands and Turkey escalated further on Saturday night when police prevented a Turkish minister from entering the consulate in Rotterdam and escorted her back to Germany after a standoff lasting several hours.

Riot police with water cannon were drafted in to break up a demonstration by some 500 people who had gathered close to the embassy. The building itself had been sealed off earlier on the orders of city mayor Ahmed Aboutaleb.

It is unclear if there were any arrests, but calm was largely restored by around 3am, eyewitnesses said.

The Dutch government issued a statement describing the visit by minister for the family Fatma Betül Sayan Kaya as ‘irresponsible’ and said the ‘verbal aggression’ by Turkey was ‘unacceptable’.

Earlier in the day, Turkish president Recep Tayyip Erdogan described the Netherlands as ‘fascist’ and ‘the remnants of Nazism’ for saying it would refuse to allow a plane carrying foreign minister Mevlüt Cavusoglu to land. The minister was planning to speak at a rally in support of a referendum giving sweeping new powers to the Turkish president.

In the statement, the Dutch government said it had made it repeatedly clear to Turkey that public order and safety would not be compromised. The threat of sanctions had made a small scale meeting at the consulate or embassy impossible, the statement said.

Rotterdam’s mayor later told reporters the consul himself had mislead the Dutch authorities in a ‘scandalous manner’ by saying nothing had been planned and then calling on people to come to the consulate.

Turkey had also used decoy convoys in an effort to deceive the Dutch police as to the minister’s whereabouts, Aboutaleb said.

And he reacted angrily to accusations that the Netherlands is a ‘remnant of fascism. ‘Do they not know I am the mayor of a city bombed by the Nazis,’ the mayor is quoted as saying.