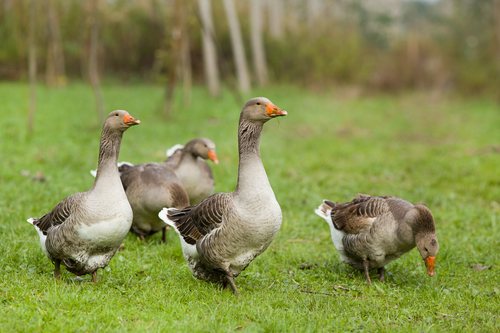 Dutch efforts to reduce the size of the wild goose population by slaughtering thousands of birds in defined ‘no go’ areas have failed to have any lasting effect, the NRC said on Monday.

According to researchers in academic journal Ambio, counts of four types of geese  over an 18 year period show that there is no change to the amount of time geese spend in areas where they are permitted to graze.

In 2005/2006, the Netherlands introduced a a new goose management policy aimed at limit compensation payments to farmers by concentrating foraging geese in 80,000 hectares of designated ‘go’ areas, and scaring geese from ‘no go’ areas elsewhere.

However, counts in the 10 years prior to the new policy and in eight years following its implementation found that ‘57% of all goose days were spent within ‘go’ areas under the new management, the same as prior to implementation’.

‘Such lack of response suggests no predicted learning effects,’ the report said.

Some 2.3 million geese are now thought to winter in the Netherlands, eight times as many as in 1975, the NRC said. In addition, the summer population amounts to around 150,000.

Experts say the rise in the number of geese is due to the intensification of farming which has created lush green pastures for dairy cows.

Every year some 100,000 geese are shot to discourage them from settling in ‘no go’ areas.

Farmers in the Netherlands were paid €16.3m for damage to crops and farmland caused by wild animals in the first six months of last year.

The compensation was paid out by the Faunafonds which was set up by the government to oversee compensation claims. Most of the money – €6.5m – went to farmers whose land is popular with Greylag geese. Barnacle geese accounted for a further €4.7m and white-fronted geese €3.9m.