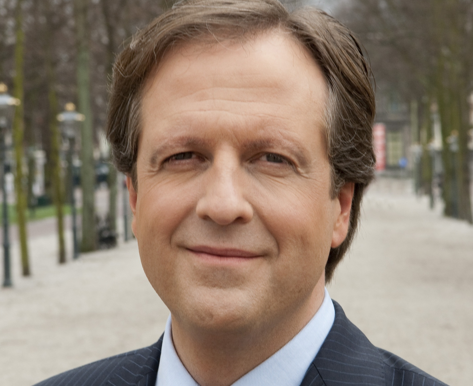 Wilders tweeted the picture with the caption: ‘Pechtold demonstrates with Hamas terrorists. Is this the next step?’

The original image, which belongs to US-based picture agency Getty Images, was taken at a demonstration in London in 2009 against Wilders’s visit to the UK. In Wilders’ version Pechtold’s face is crudely pasted in beneath a banner reading: ‘Shariah for the Netherlands.’

Pechtold later posted a response on his Facebook page calling for politicians to ‘draw the line’ at posting fake pictures of each other online. He added that the picture had triggered a torrent of personal abuse on Twitter.

He wrote: ‘A lot of the time I can laugh about people being creative with pictures on the internet. But not this time. Not because I can’t take it, but because it gives people the wrong idea. That is clear from my timeline. This is how Wilders stirs up his supporters.’