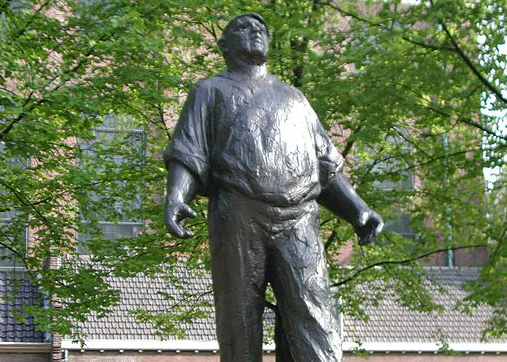 A call by the Amsterdam city archives for photos and personal stories of people who participated in a 1941 strike protesting at the deportation of Jews has resulted in a unique find, public broadcaster NOS writes.

A family member donated a farewell letter from one of the organisers of the strike, road worker Willem Kraan. The letter is dated November 19, 1942, the day of his execution by the Nazis.

Kraan, with fellow-communist Piet Nak, was one of the driving forces behind the strike on February 25, 1941 which was a response to the arrest and deportation of 425 Jewish men and boys to Mauthousen and Buchenwald concentration camps. Thousands downed tools and public transport came to a halt. In the wake of the strike, which lasted two days, the Germans arrested and executed a number of organisers, including Willem Kraan.

The city archives’ request for material came to the attention of Kraan’s granddaughter Ellen Hettenga who had a photograph of her grandfather and the letter he wrote before he was executed in Soesterberg.

The letter, now in the Resistance Museum in Amsterdam, was the most remarkable find to come out of the search for material relating to the February strike, NOS writes.

In his letter, Kraan starts by giving ‘1000s of kisses’ to his wife, little daughter and relatives and tells them he is to be executed that afternoon. ‘I was born a Kraan and a Kraan (a kraan in Dutch is also a brave and forthright person, DN) I shall remain to the last second,’ he writes.

He urges his wife to tell their daughter about his end when she is old enough because ‘otherwise she might feel ashamed of her daddy and she shouldn’t because I am no traitor and I die for my ideal which I hope won’t be for nothing’.

Names of strikers are known from documents but the archives had not focused on finding the faces behind the names so far.

The city archives exhibition Stad in Oorlog (City at War) Amsterdam 1940-1945 runs until May 14 but doesn’t include Kraan’s letter.

Here is most of the letter in full.

On Thursday morning we, that is fourteen of us, were told that our sentence has been confirmed and will be executed at three in the afternoon. Bets, Catrientje, Mother and all the other family: my name is Kraan and a Kraan I shall be unto the last second and I hope that all of you and particularly you Bets will be a credit to the name because it is you Bets who must stay healthy and strong because for the rest of your life you will have to be both father and mother to what I treasure most in life and that is our darling Trieni. So Bets and Trieni, stay strong and don’t think of me too long and please be kind to one another, and Bets, Trieni won’t understand why I am to die but you will of course tell her when she is old enough, you will won’t you, Bets, because otherwise she might feel ashamed of her daddie and she shouldn’t because I am no traitor and I die for my ideal which I hope won’t be for nothing.’