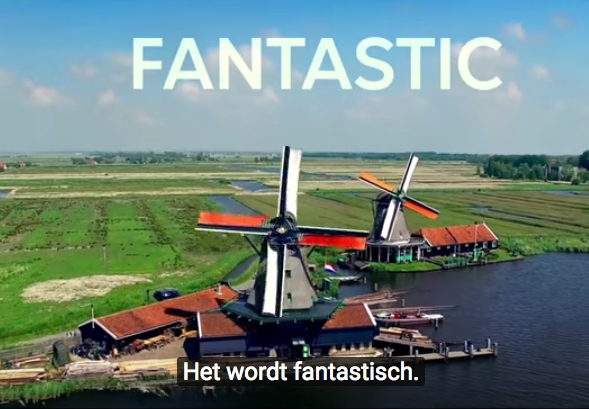 The satirical video clip introducing the Netherlands to president Donald Trump ‘in a way he would understand’ has been picked up by media around the world, including American website Buzzfeed and papers in France, Germany and Italy.

The clip was downloaded 42 million times on the Zondag met Lubach facebook page and shared over half a million times. The DutchNews website crashed briefly on Tuesday because of the overwhelming interest in the video.

In a reaction to the video’s plea to ‘make the Netherlands second’ a petition  was started by an anonymous American saying: ‘The Netherlands has requested, within the scope of the new America first initiatives, to be simply: second. They don’t want us to forget about them. So the White House should give them a call. 2nd place is open, and they asked nicely before anyone else. We’ll make them great too. We can do it.’
100,000 signatures are needed to elicit a response from the White House. So far the petition has been signed once.

In the Netherlands reactions from the people and organisations mentioned in the video as ‘the best in the world’ have ranged from bemused to amused, the Volkskrant writes. Politician Jette Klijnsma who is presented as ‘a disabled politician for you to make fun of’ in a reference to Trump’s alleged mocking of a disabled journalist, could see the funny side and said she thought the video ‘Great. Simply fantastic. Best video ever.’

Commercial director Niels Dijkstra of pony park Slagharen (‘You can ride them, you can date them, you can grab’em by the pony’) told the paper he was originally not quite sure what to make of the election as the ‘best pony park in the world’. But his doubts were soon dispersed.

‘I saw a message on LinkedIn from a Swiss man who wrote: ‘My girls are ready to ride the best pony’s in the world’. The amount of attention we’re getting is just bizarre. Our site had 10,000 visitors in one day. That hardly ever happens, perhaps every once in a while in summer when the weather is nice but now we’re not even open,’ the Volkskrant quotes him as saying.

Madurodam (‘It’s tiny. But it’s great’) director Joris van Dijk said the video was a ‘gift’. ‘The publicity has been massive.  Even the Maduro family reacted from the States. We depend on foreign visitors for about 45 % of our turnover. Some ten thousand Americans come to Madurodam each year so we will be able to see if this has helped to increase visitor numbers,’ Van Dijk told the paper.

NOS journalist Gerri Eickhorst was bemused more than anything else at his very brief appearance in the video which simply said ‘This is Gerri Eickhof’ showing the reporter wearing a furry hat. ‘I don’t want to flatter myself and say that if you don’t know me you don’t know the Netherlands,’ he told the paper. ‘Perhaps it was the hat’.