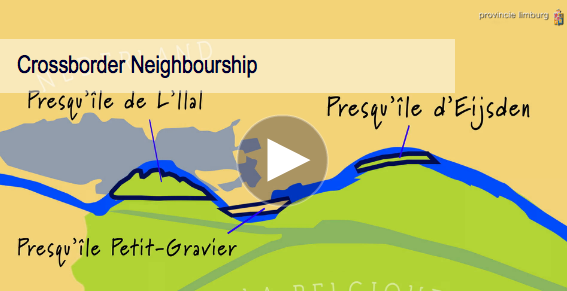 The Netherlands and Belgium will today sign a formal treaty swapping pieces of land along their border at the Maas river.

The signing ceremony is taking place during an official three day visit to the Netherlands by Belgium’s king Filip and queen Mathilde.

Two Belgian parcels of land – Presqu’île de L’llal and Presqu’île d’Eijsden – are being swapped for a Dutch piece of land called Presqu’île Petit-Gravier. The land swap, only the second between the two countries in 175 years, will increase the size of the Netherlands by some 10 hectares.

The change is needed following work to straighten bends in the Maas river in 1961, which left three pieces of land on the wrong side of the border.

That, says broadcaster NOS, has led to ‘isolated enclaves of illegality’ because Belgian police can only access the islands by boat and with official permission of the Netherlands.

Even though no people live on the islands and there are no buildings, organising the land swap has been a time consuming process, Limburg governor Theo Bovens told the broadcaster.

‘Ministries from both countries, the water authorities, the land registry, the provincial governments, three local councils and districts are involved,’ he said.

If the treaty is approved by both parliaments, the land swap will be a reality in January 2018.