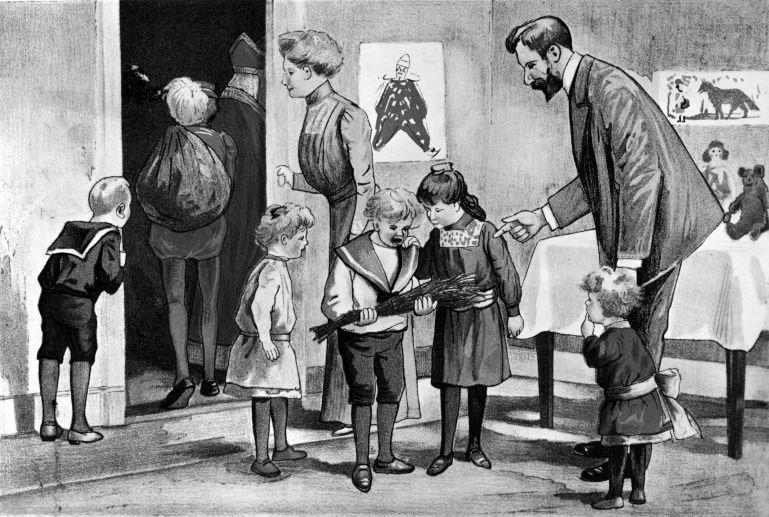 An old sketch of Sinterklaas with his present-laden helper

A new exhibition on Zwarte Piet in the media reveals that the figure has always changed and there is no ‘traditional’ norm, according to Het Parool.

The display opened at the Persmuseum in Amsterdam on Thursday, and curator Jop Euwijk told Het Parool: ‘The people who say now that they want to preserve the Zwarte Piet of the past, should perhaps realise that this Piet does not exist. At least not in a fixed way. There has always been change.’

Euwijk, who is attached to historical research body Het Citaat, was commissioned by the Persmuseum and The Netherlands Institute for Sound and Vision to look through this body’s archives for historical representations of Santa’s helper.

The recent incarnation of Zwarte Piet, blacked up and with thick lips, has caused a storm of controversy in the Netherlands and abroad. The children’s ombudsman, Magrite Kalverboer, was the latest influential figure to criticise him last month as contributing to ‘bullying, exclusion or discrimination’ and contravening the UN rights of the child.

But Euwijk found that both Zwarte Piet and Sinterklaas have changed shape through time, with Santa veering to and from more Catholic representations and depictions of scary, servile Piet with a chain on his foot, but also as a wholly unblacked-up clown.

Meanwhile, the Telegraaf reports on Friday that a schoolteacher from a disadvantaged area in Utrecht, Pim Walenkamp, has asked for clarification about the children’s ombudsman’s research, claiming it stemmed from ‘a non-representative group’ of children and criticising her methods.

Earlier this month, a court ruled that a Zwarte Piet protestor Jerry Afrijie was arrested with excessive force during a protest in 2014, a ruling the public prosecutor is appealing.