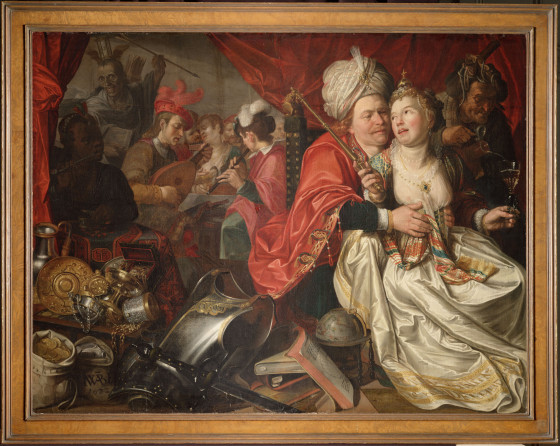 Vrouw Wereld by Jacob Waben, one of the 24 stolen artworks.

Five paintings stolen from a museum in Friesland more than a decade ago could be back home within weeks after Dutch and Ukrainian authorities agreed to organise transport.

A Dutch art expert is due to travel to Kiev on Wednesday to check the authenticity and condition of the paintings, which are said to have been badly damaged.

Restorer Ronald de Jager told De Telegraaf: ‘The damage is huge: the canvases have been pulled out of their frames and rolled up or folded.’ He declined to estimate the cost of restoring the works.

A total of 24 artworks went missing from the Westfries Museum in Hoorn in January 2005. Their whereabouts was unknown for years until they turned up in the hands of a Ukrainian nationalist group who tried to sell them to the Dutch embassy.

Ukrainian police recovered four of the paintings in April, while a fifth was handed in to the Dutch embassy in Kiev. The other 19 remain unaccounted for, along with 70 items made of silver.

Museum curator Ad Geerdink said in December that high-ranking Ukrainian officials were involved in a plot to demand ransom money in exchange for handing over the paintings.

Dutch officials had hoped to repatriate the works during the summer, but the process was held up by conditions imposed by Kiev such as showing proof of ownership.H