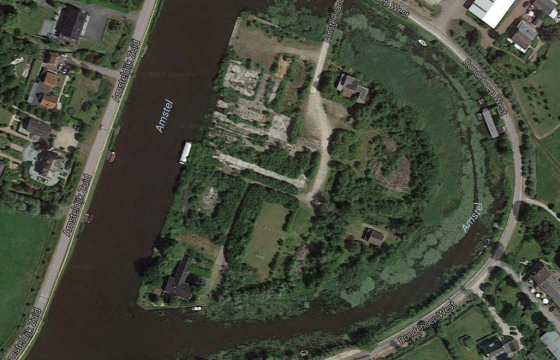 Amsteleiland, a potential nestling spot for 30 luxury houses, is up for sale for around €2.3m – with the ‘free’ extras of costly land remediation and nature-loving squatters, reports the Telegraaf.

The paper, which claims it has seen documents prepared for the auction of so-called ‘rich man’s island’ on October 20, says Amstelveen municipality has confirmed it is up for sale, after a troubled history.

For years, it has passed from one owner to another, with the hope of building millionaires’ deluxe houses receding ever further. The land, which had been used for shipbuilding, was heavily contaminated and remediation of the soil – auction documents apparently admit – will cost some €4.5million. There are also some residents already, in the form of squatters in some old houses still standing.

Herbert Raat, head of housing at Amstelveen city council, told the Telegraaf: ‘There is room for 30 homes in the high part, in a beautiful location. There’s great demand for this sort of housing and we don’t want people spending their money abroad. Of course, there is a cost for cleaning the land. But this really is one of the best locations currently available in the whole region.’

Propertize, mortgage lender and currently owner of Amsteleiland, did not comment to the paper and nor did Mark Krol, the entrepreneur who has previously tried to develop the island.

The Parool added that the sale – ‘due to mortgage debt arising’ – is expected for around half of the 23,500 square metre island’s former value. Meanwhile, the island’s current squatters are campaigning to stop any clean-up wiping out protected wildlife species they say live there.

By contrast, the Parool reports on Friday that nine square metre rooms are on sale in the Oranjehof in Amsterdam West for a bargain €62,000.