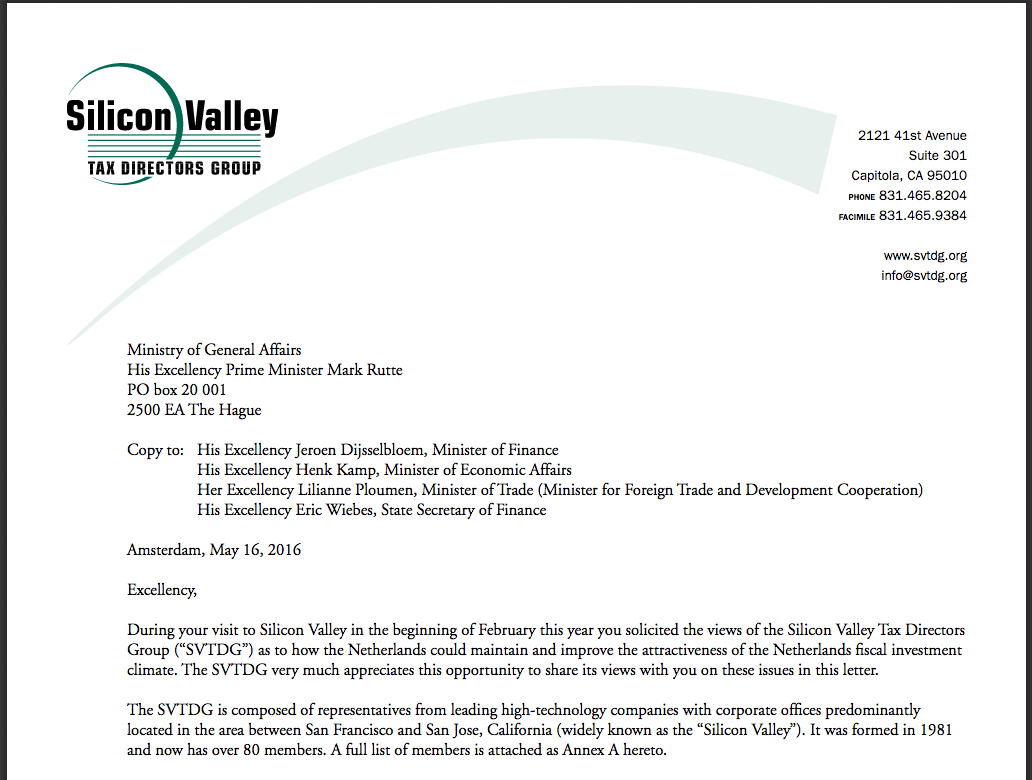 Eight technology firms have written to prime minister Mark Rutte warning him that proposed reforms to the corporate tax system could blunt the Netherlands’ competitive edge, the Financieele Dagblad said on Monday.

In particular the companies are concerned that plans to tackle tax avoidance will put off international investors, the paper said.

The paper quotes from a letter drawn up by the tax directors of companies such as Apple, Google and Cisco Systems, which was sent to the prime minister in May after his fact-finding trip to Silicon Valley in February.

Rutte had asked the association what steps the Netherlands could take to improve its tax climate.

In the letter, the Silicon Valley Tax Directors Group (SVTDG) list a number of tax incentives which benefit foreign firms: advance tax rulings, the favourable participation exemption regime, the wide network of tax treaties, the absence of a tax on interest and royalties and the 30% tax ruling for expats.

‘The elimination of one or more of these features will adversely impact both existing US investments as well as the flow of new US investments into the Netherlands,’ the letter states.

‘We recommend that the Netherlands government carefully considers the pros and cons of any change to the current business tax regime. This applies in particular to the successful tax ruling practice which has been so important for attract foreign investments to the Netherlands.’

The letter goes on to state that the recent state aid investigations launched by the European Commission – into Starbucks in the Netherlands for example – are ‘not a good development’.

‘Tax rulings are an important instrument for obtaining legal certainty, which is particularly relevant if long-term capital commitments are being considered by investors in the Netherlands,’ the organisation states.

‘A discontinuation of the ruling practice without reasonable alternatives being available will harm the Netherlands’ investment climate, resulting in reduced foreign investments and job losses.’

They also advised the government to cut the basic corporation tax rate from 25% to well under 20% to enable the Netherlands to remain competitive with Britain, Switzerland and Ireland.

The letter is signed by some 80 companies including Amazon, eBay, Microsoft and SAP.