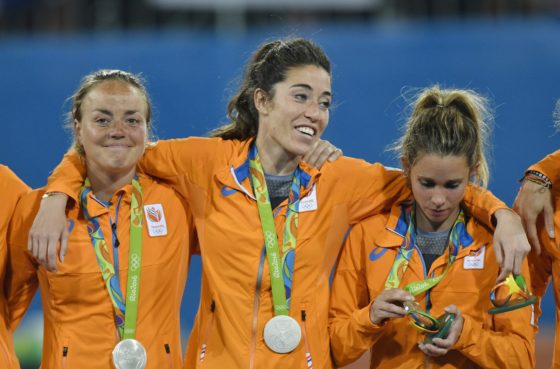 The 14th day of the Olympics in Rio delivered two more silvers to the Dutch medal haul.

Jelle van Gorkom won silver in the BMX, coming just behind Connor Fields of the US. Niek Kimmann, who had been tipped as a potential gold medalist, was seventh. He suffered a slight ankle injury in the semi-finals.

Hopes of gold had also been pinned on the women’s hockey team, the defending champions who were hoping to make it three in a row. Great Britain beat Oranje in a penalty shoot out after the match ended 3-3 at the end of normal time.

The match was also the last international appearance by Naomi van As, who has played in three Olympic finals and scored 45 times in 229 matches.

Show jumper Jeroen Dubbeldam completed his final round without a fault but broke the time limit by two hundredths of a second and was outside the medal winners.

The Netherlands is currently 10th in the medals table, with eight gold, six silver and four bronze.

In action on Saturday: the Dutch women’s volleyball and handball teams are both competing for a bronze medal. Triathlete Rachel Klamer and taekwondoka Reshmie Oogink, who is trained by her brother, are also among the potential winners.

On Sunday, boxer Nouchka Fontijn will meet the favourite Claressa Shields in the final of the middleweight competition.