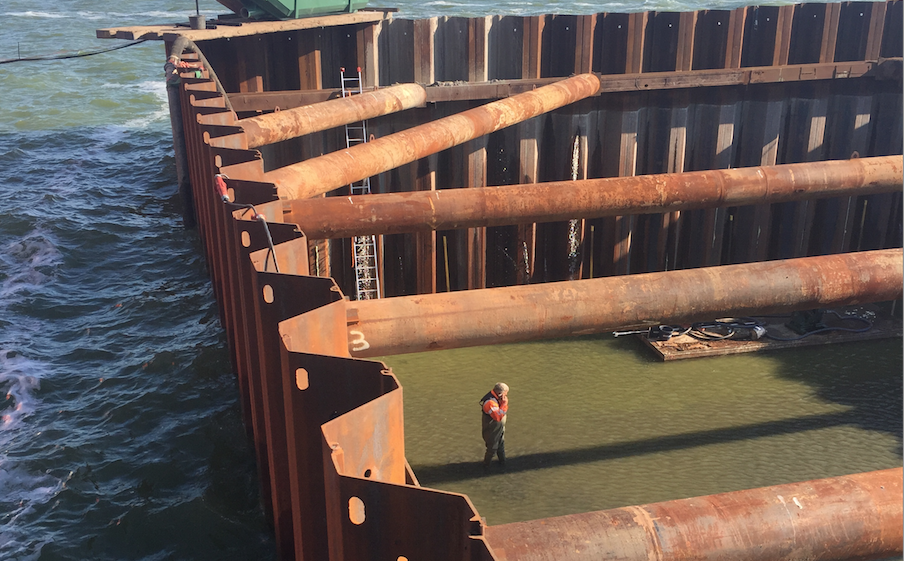 A salvage company working for the Dutch ministry of defence is working to free a British World War II bomber from its crash site in the IJsselmeer lake.

A bent propeller, parts of a motor and two loaded machine guns belonging to the plane, thought to be a Vickers Wellington, have already been brought to shore, broadcaster NOS reported. The plane crashed some 17 kilometres off the coast at Lemmer and officials hope that they will be able to identify the plane by serial numbers on some of the parts.

Salvage experts have now placed steel walls around the crash site and have been pumping out 4,000 cubic metres of water to reveal the lake bottom and what is left of the plane. The pieces will then be taken to shore for further investigation.

The wreck was first identified in 2014 by a dredging company exploring the IJsselmeer for sand and gravel. No alternative site has been found, so the plane is now being moved to give the dredging company access.

Next week, the British airforce will fly over the location in a World War II bomber in recognition of the airmen who died in the crash, NOS said.

According to the defence ministry, the plane was shot down in 1941 on its way to Bremmen. According to some reports, the crew was Polish.

There are human remains on the plane, possibly from more than one airman, the defence ministry says on its website. ‘It is an honour to be able to bring home the missing,’ major Arie Kappert, who is in charge of the recovery project, said. ‘If they are there, we will find them.’

In May it emerged there are 501 WWII crash locations in the Netherlands which have never been investigated. Of the missing crew members, some 600 are British, 228 American and 247 German.

Many of the missing airman are believed to have crashed in the Wadden Sea or IJsselmeer lake and their aircraft have never been located.