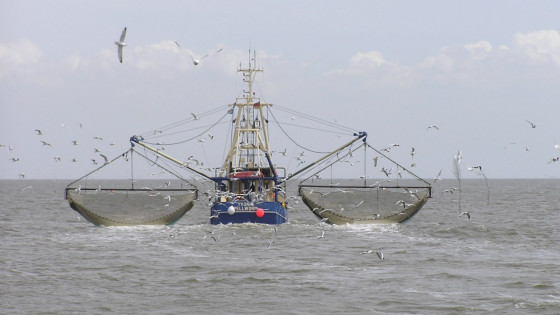 Dutch fishermen are planning a series of protests against European rules that they claim are destroying their industry.

The ‘Eendracht Maakt Kracht’ (‘Unity Is Strength’) movement says it wants to inform the public about ‘the real story’ of Brussels interference. ‘Fishermen are tired of the lies of politicians and environmental organisations,’ spokesman Jan de Boer told the Volkskrant.

The group’s first campaign is planned for the World Port Days in Rotterdam, in the first week of September, when around 50 cutters will sail into the harbour and fishermen will hand out flyers and serve fried fish.

De Boer ruled out direct action such as French-style blockades. ‘Blockades just lead to more frustrated people,’ he told the newspaper. ‘Everybody should be allowed to get on with their work.’

EMK’s main grievance is with the fishing quotas imposed by Brussels and the tide of regulation that comes with them. Fishermen are unhappy with rules that state that all fish caught at sea count towards the quota, including those that are too small to sell. Crews are no longer allowed to throw ‘worthless’ tiddlers back in the sea.

The group, which evolved from a WhatsApp community in fishing communities such as Urk, is also critical of the existing representative groups in the industry, which it says have failed to stand up for fishermen’s interests. ‘The groups in the fisheries sector are always in talks but never strike a blow,’ said De Boer.

But marine ecologist Han Lindeboom, of Wageningen University, argued that the fishing industry was already well represented in environmental talks. Lindeboom said that his proposal for a no fishing zone covering a quarter of the North Sea, something he has lobbied for for 25 years, had been blocked by interest groups. ‘There are very few protected areas in the North Sea,’ he said.