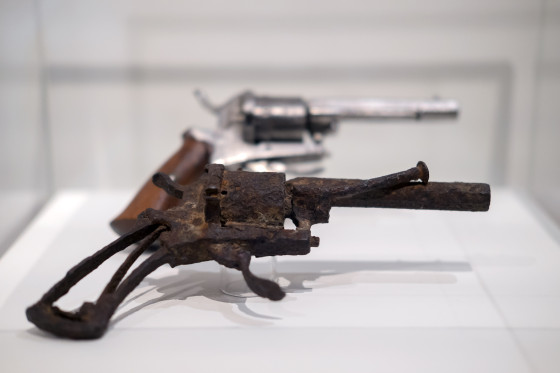 A gun which Vincent van Gogh may have used to kill himself will be on show in the Amsterdam Van Gogh museum from this week, as part of an exhibition on the artist’s madness.

The rusty weapon, which was in the hands of a private collector, is not normally on display, broadcaster NOS said on Tuesday. There is no absolute proof it is the gun used by Van Gogh but the arguments, say experts are convincing.

‘We cannot say it with 100% certainty,’ museum spokesman Teio Meedendorp admitted to broadcaster NOS. ‘But the arguments do make you think.’

The gun was found mid last century in the field outside Auvers where Van Gogh committed suicide at the age of 37. It is a Lefaucheux à broche, which was a popular type at the time. Research showed the heavily rusted gun had been in the ground for 50 to 80 years, which also makes sense. Van Gogh shot himself on July 27 1890. The gun was not in safety mode, meaning it had been used.

Experts also point out that the gun was not suitable for suicide and was more commonly used by shopkeepers to scare off potential thieves. This would also explain why Van Gogh, who shot himself in the chest, was able to get back to the hostel where he was staying and died two days later.

The exhibition On the Verge of Insanity focuses specifically on Van Gogh and his mental condition.

Some 25 paintings and drawings from the final year and a half of the painter’s life tell the story of his battle with illness. They include several important loans from international museums, such as the portrait he made of his doctor, Félix Rey, a masterpiece from the Pushkin Museum in Moscow, which is being shown at the Van Gogh museum for the first time.

Original letters and exceptional documents are also on show, including the police report and the petition signed by local residents in Arles in 1889 calling for the artist’s confinement to a mental hospital.