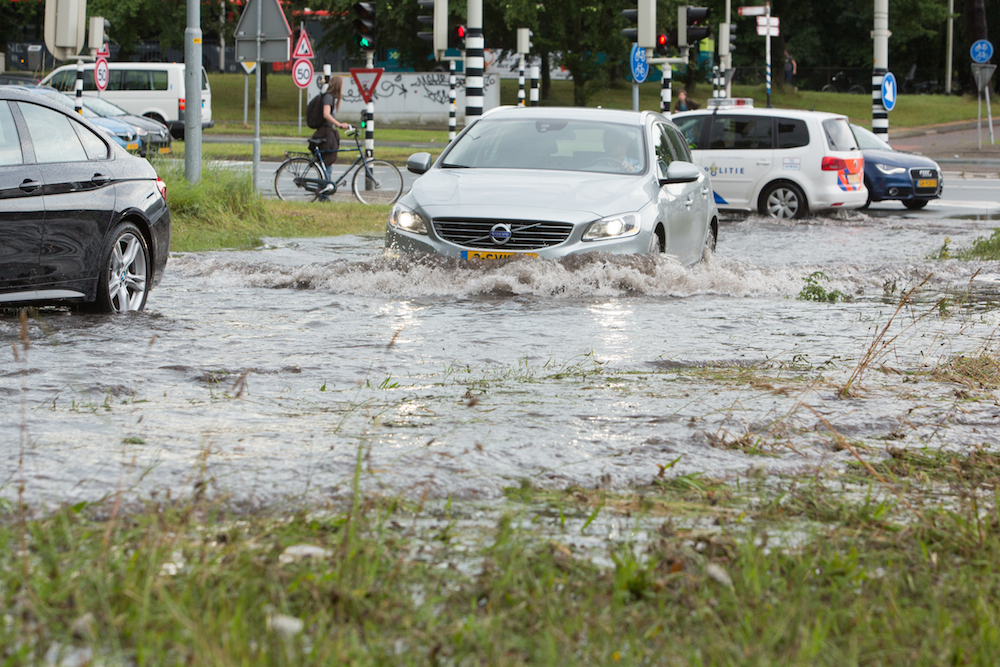 The heavy rain brought flash floods to many roads and the KNMI weather bureau raised its storm warning to code orange in the urban Randstad region on Thursday morning. At Rotterdam airport, for example, a record 47.9 mm of rain was recorded, taking the total so far this month to nearly 150 mm.

Damage was reported all over the country. In Oostkapelle in Zeeland, 70 beach huts were destroyed by a whirlwind.

Near Utrecht, some 20 trees lining the Amsterdam Rhine canal were snapped off in the strong winds.

The storms hit first Zeeland at around 2am and the emergency services were called out dozens of times to deal with localised flooding and the effect of lightning strikes, the Volkskrant said.

The A28 between Amersfoort and Utrecht was reduced by two lanes in both directions because of the water, leading to delays of up to 45 minutes for motorists. There was also flooding on the A4 at Leidschendam and on the A20 at Schiedam.

Lighting caused a major fire at a family home in Moerkapelle and three families had to be evacuated in Pijnacker after a small fire in an attic.

Fire engines were called to the Boijmans van Beuning museum in Rotterdam to carry out emergency pumping after part of the building’s cellars flooded.

Also in Rotterdam, a man was found dead in a pool of water where he had reportedly been growing marijuana. He had been electrocuted.

Social media is full of photographs of spectacular stormy skies and the Telegraaf has film of streets in Halfweg turning into swimming pools.

The mushroom storm cloud over Utrecht before it broke #cloud #storm pic.twitter.com/CbRXoO6uZ8