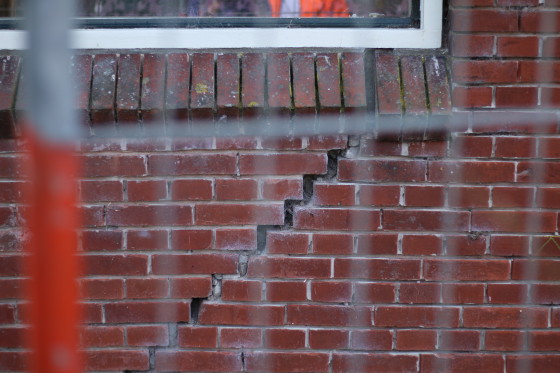 Cracks in the wall of a property damaged by earthquakes. Photo: Graham Dockery

Oil companies Shell and Exxon held secret talks with the economic affairs ministry in 2005 to set levels of production in the Groningen gas field up to and beyond 2020, according to documents obtained by NOS.

The documents show that the two companies exerted pressure on the ministry not to scale back gas extraction despite increasing concern over the increased frequency of earthquakes in the region.

The Dutch parliament was informed of the talks, which took place in 2005, but only knew of an agreement to set production levels for the next 10 years. The documents obtained under freedom of information legislation show that the deal also covered the years up to 2020, when the gas field is expected to go into decline, and afterwards.

In 2010 a civil servant wrote in a memo that parliament had ‘not been informed about long-term production’ and that the agreement between the oil companies and the ministry ‘limits the policy capacity of the minister’ to set production levels.

Tens of thousands of homes in Groningen province have had to be shored up because of damage caused by earthquakes that have been linked to gas extraction, and some houses are unsellable. House prices have fallen by as much as 12% in areas worst hit by earth tremors.

NOS requested the documents as part of an investigation into gas production in 2013, when it reached its highest level for 30 years despite a warning by the regulator (Staatstoezicht op de Mijnen) that extraction needed to be scaled back urgently.

MPs from all parties have called on economic affairs minister Henk Kamp to clarify the allegations.

Kamp said in an initial reaction he is unaware of any secret agreements and that he would investigate if required to do so.